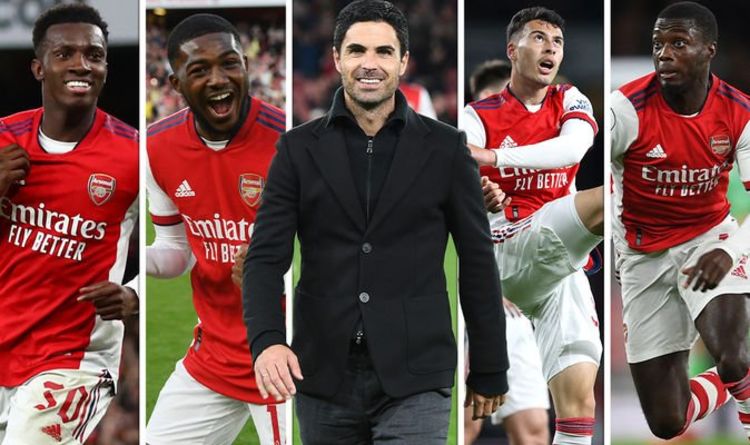 Arsenal boss Mikel Arteta rang the changes for the Carabao Cup clash at home to Leeds United on Tuesday. The Gunners ran out 2-0 winners over Marcelo Bielsa's side despite just two players who started the 3-1 win over Aston Villa being named in the starting XI. Express Sport looks at the fringe players who failed to impress, as well as those who gave Arteta something to think about.

Maitland-Niles started in midfield, a position he favours but has not often played for Arsenal.

The academy graduate has intriguing qualities for a central midfielder, including a burst of pace which shows why he has often been used as a wing-back.

At 24, Maitland-Niles has reached the point where should be pushing for a regular spot.

He showed glimpses against Leeds as having the potential to be one of Arsenal's midfield options moving forward.

Holding was brought into the side in place of Gabriel and was given the armband.

Ben White was forced off with an injury in the second half, making him a doubt for Saturday's trip to Leicester.

Holding looked solid and is an option to step into White's shoes if he were not to be available.

The 26-year-old was comfortable taking the ball out from defence into the midfield, especially in the first half, giving Arteta confidence he can use him in league action.

He also limped off with 15 minutes remaining but it appeared to only be cramp.

With Granit Xhaka currently sidelined with a knee injury, Elneny is one of three recognised central midfield options for Arteta.

A strong showing against Leeds could have given Arteta a dilemma but the Egyptian did himself no favours.

Summer signing Albert Sambi Lokonga has already moved ahead of Elneny in the pecking order and you can see why.

Elneny is not at the level to be an Arsenal regular and surely won't be offered an extension to his contract that expires next summer.

Martinelli showed so much promise during his first season at Arsenal.

However, the young Brazilian's injury problems have seemingly stalled his progress.

A lack of regular game time at this level can't be helpful for the forward.

But his performance tonight did not push his case for a starting spot in the Premier League.

He looked dangerous at times but lacked the end product needed to put pressure on the likes of Bukayo Saka and Emile Smith Rowe.