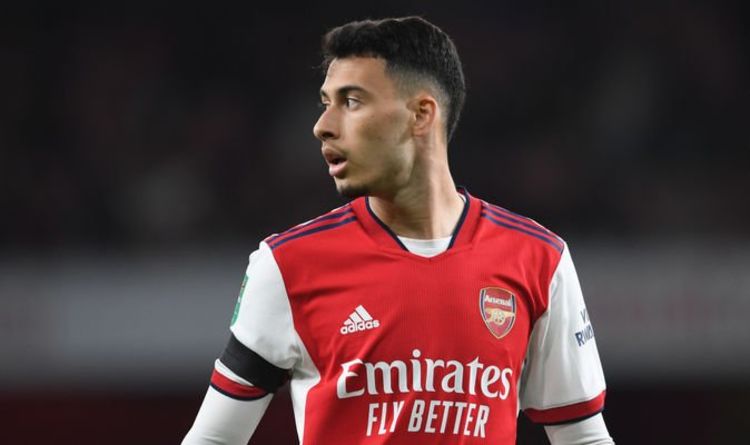 Arsenal will be looking to build on their impressive run of form when they host Leeds United in the fourth round of the Carabao Cup tonight. And boss Mikel Arteta could make six changes to the side which defeated Aston Villa on Friday evening, with Gabriel Martinelli set for a rare start after his fantastic performance in the previous round.

The Gunners are unbeaten since August in all competitions and have racked-up a sensational nine goals in their first two Carabao Cup games of the campaign.

And Express Sport looks at how Arteta’s side could line-up.

Aaron Ramsdale made his Arsenal debut in the Carabao Cup victory over West Brom and he soon had the number one spot nailed.

Bernd Leno started Arsenal’s first three games of the season but lost his place after conceding nine goals in those games.

Arsenal have looked much more assured with Ramsdale between the posts and have kept four clean sheets when he has played.

Gabriel Martinelli could be one of six changes for Arsenal when they host Leeds in the Carabao Cup (Image: GETTY)

He could well keep his place to provide his side with the stability they need against a dangerous Leeds side.

Arteta completed a masterstroke by signing Takehiro Tomiyasu in August and Arsenal have looked defensively sound with the Japan international in the side.

Tomiyasu could line-up at right-back, with Nuno Tavares on the opposite flank.

Tavares filled in for the injured Kieran Tierney against Villa and should keep his place for this one.

Rob Holding could be the only change in the backline if he’s chosen to partner Ben White at the heart of the Arsenal defence.

The 26-year-old was named in the starting team for the second and third round victories.

Arsenal boss Mikel Arteta will be hoping for victory against Leeds in the Carabao Cup (Image: GETTY)

Arteta is likely to turn to Martinelli once again after the 20-year-old Brazilian terrorised the Wimbledon defence in the last round.

He could be given the nod to lead the line and show his goalscoring credentials.

Nicolas Pepe could return to the fold after dropping to the bench against Villa, while Bukayo Saka could get another start to complete the front three.