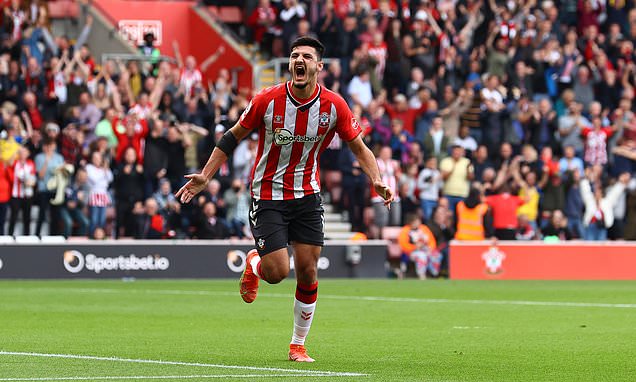 Ralph Hassenhuttl warned it wouldn’t be a five-star dinner. Never a truer word, as it turns out, but sometimes a dirty kebab will do just fine.

This was one of those. It wasn’t pretty, heavens no. And you wouldn’t expect it to be, not with the way these teams have been playing. But needs must, and the need for Southampton was really rather desperate.

It still is, of course. But for Hasenhuttl a little of the pressure can ease for now, with their first league win of the season secured after the eighth round of fixtures, courtesy of one good breakaway and one good finish from Armando Broja.

It was his first start following his loan from Chelsea, so maybe it can prove a launching point for man and collective. Maybe. With upcoming games against Burnley, Watford, Aston Villa and Norwich, there is certainly an opportunity to exploit, and one that really needs to be taken by a club that sat fourth at this precise point last season.

As for Leeds, looking back might be the only way of seeking comfort. This campaign is shaping into a bit of a slog, with all that glittered last season looking a little faded this time around. Marcelo Bielsa can point to absences and he would have a good point – Patrick Bamford, Raphinha and Kalvin Phillips all missed this game. But the mitigation should only go so far for a side that failed to land a shot on goal here. To call Leeds weak would quite possibility undersell how poor they were in a fixture of considerable importance to both teams.

The desperation for Hasenhuttl could be measured in the scale of his rotations ahead of the game, with five changes to the side that prolonged the winless streak from six to seven prior to the international break.

Most notably there was no James Ward-Prowse, who was beginning a three-match ban and so ended a run of 102 consecutive league appearances, while Kyle Walker-Peters, Theo Walcott, Nathan Tella and Adam Armstrong joined him in missing out. Romain Perraud, Armando Broja, Moussa Djenepo, Mohamed Elyounoussi and Ibrahima Diallo came in.

Meanwhile, Bielsa was stripped of his sharpest tools, with the month-long absence of Bamford compounded by the newer losses of Phillips and Raphinha to a calf issue and jet lag respectively. The upshot of all that was a dire first half from Leeds.

They were truly awful – one shot of zero consequence, no corners, no grip on midfield and no obvious plan to utilise the pace of Daniel James. A frenzy of movement and tactical fluidity? Always. That will not change under Bielsa. But coherence in the madness? Nothing. And that has been a key difference between last season and this.

They were truly awful – one shot of zero consequence, no corners, no grip on midfield and no obvious plan to utilise the pace of Daniel James. A frenzy of movement and tactical fluidity? Always. That will not change under Bielsa. But coherence in the madness? Nothing. And that has been a key difference between last season and this.

As for Southampton, they were fractionally better across the first 45 minutes in that they succeeded the creation of some chances. Not many but some.

The best came from a set-piece on 20 minutes in the moments after Nathan Redmond forced Illan Meslier into conceding a corner. Redmond’s delivery was flicked from near post to far by Armando Broja and that appeared to leave an open goal for Mohamed Elyounoussi. Perhaps he was caught between thoughts, but he threw himself into a diving header and somehow missed the ball altogether.

The rest, beyond a reasonably easy Meslier save from Broja, was quite forgettable.

The second half opened with a better tempo. Leeds had their first opportunity when Jack Harrison skipped into a decent position and had a shot deflected over by Mohammed Salisu, and it was from the breakdown of a second Leeds attack that Southampton went ahead. Moussa Djenepo led the counter with a 40-yard run and throughball for Redmond, who in turn surged into the Leeds area at speed. With good poise he waited for Liam Cooper to commit before squaring to Broja who finished. A fine move to bring light to the grey.