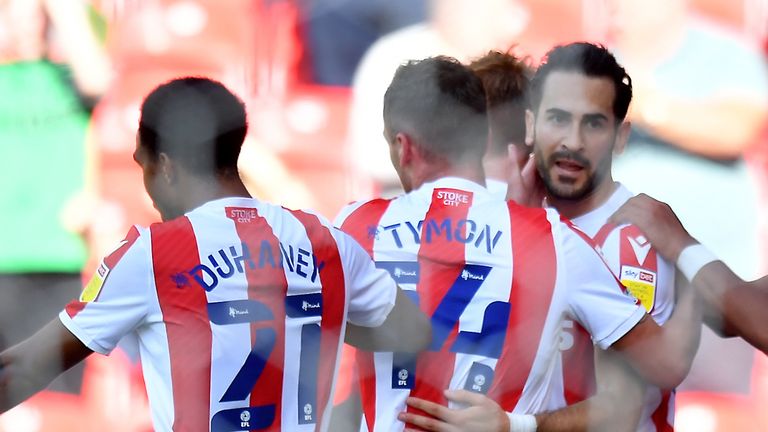 Stoke consolidated their place in the play-off places with a 2-0 win at home to Hull.

Mario Vrancic and Nick Powell scored goals in either half as the Potters secured their first win in three matches.

They were made to work hard for the victory against an energetic Hull side who tested Stoke inside the opening half hour.

Adam Davies made a good save from Tyler Smith before Lewie Coyle hit the post.

But, once Vrancic broke the deadlock with a clinical finish, it was a match which Stoke always looked like winning.

Hul are without a victory since the opening day of the season and have yet to win away.

The game enjoyed an open start with Matt Ingram cutting out a dangerous low cross from Josh Tymon as Jacob Brown prepared to pounce on six minutes.

Davies was out fast to block Tyler Smith's attempted lob, before Matt Smith fired the rebound wildly over on 11 minutes.

Keane Lewis-Potter headed Coyle's cross over seconds later as the visitors came into the game.

Coyle hit the post with a 30-yard shot on 14 minutes after the Stoke defence sat back.

Ingram fumbled a long-range Sam Clucas shot on 22 minutes before the rebound was cleared to safety.

Callum Elder made a brilliant last-ditch tackle in the box after Clucas got goal-side on 27 minutes.

Malik Wilks was close to getting on the end of Greg Docherty's cross three minutes later.

Vrancic put Stoke ahead after he turned two defenders before firing into the roof of the net on 35 minutes.

Ingram acrobatically beat away a Nick Powell shot after he cut inside before unleashing a shot from the edge of the box on 50 minutes.

Clucas had a shot well blocked three minutes later as Stoke started to increase the pressure.

Powell doubled Stoke's advantage on 58 minutes after he curled home a 35-yard free-kick.

Ingram may feel he could have done better after he got his hand to the ball.

Lewis-Potter scuffed a shot straight at Davies on 68 minutes.

Sam Surridge failed to get power behind his shot a minute later, before Coyle blazed over from distance at the other end.

Brown drilled a 20-yard shot wide on 90 minutes after a Stoke counter-attack.