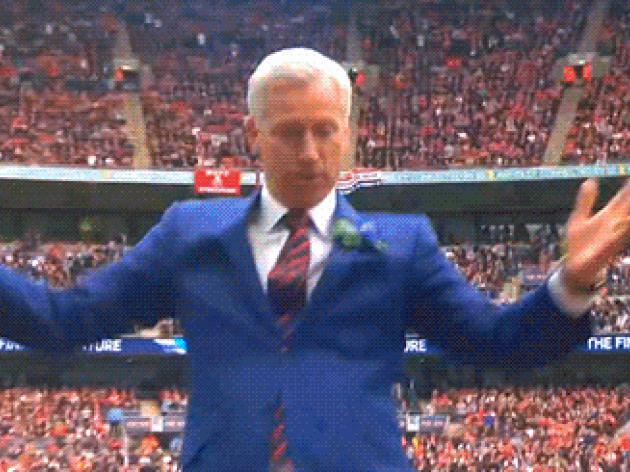 Alan Pardew is one of the most iconic cult figures of the Premier League era.

Known for his charismatic, dad-like charm, when most think of the former Newcastle and West Ham boss, they think of the time he danced on the touchline after Jason Puncheon opened the scoring against Man Utd at Wembley.

He wasn't always in keeping with that silly, larger-than-life character, though. Oh no, there was certainly a mean streak behind those dodgy black glasses he occasionally wears nowadays.

We are of course referring to the time Pards left a little bit too much of his head in on Hull City midfielder David Meyler.

"If he'd have dropped me I'd have never lived it down!"

On this day in 2014, @DavidMeyler was involved an utterly bizarre touchline incident with Alan Pardew.

Tensions weren't even particularly high on 1 March 2014, when the Ireland cap raced over to get the ball to take a throw-in quickly - a fairly normal thing to do when your team is 3-1 down.

For whatever reason, though, Pardew wasn't pleased with his urgency, and did the type of thing any manager warns his players against.

He leaned in, made contact with Meyler's head, and all sorts of hell broke loose.

Pardew was immediately sent to the stands. Less immediately, he was hit with two separate fines totalling £160,000, and banned from the touchline for seven games by the FA.

That is despite his later protests that it didn't even qualify as a headbutt, because the motion wasn't quick enough.

"I did not mean any damage to the guy but I have moved my head forward," he said, before delivering one of the funniest lines in football press conference history: "I tried to push him away with my head.

"I apologise to everyone. I should not have got involved in it. But I don't think it was a headbutt. It wasn't a motion that was quick.

They soon made up though. Reflecting on the incident later, Meyler defended the Newcastle boss amid calls that he should be sacked for the flashpoint - these things happen, apparently.

Meyler said (per Independent): "When the ball went over that way, I just rushed to get it back because I wanted to try and get us back into the game. Obviously the rest is history, but it’s all done and dusted; he apologised and that’s it.

“The FA dealt with it in their own way and Newcastle did too. He served his ban and he was fined heavily. He will be annoyed with himself. I just had to worry about the game and then going away on international duty. He apologised straight away.”

Hull lost the game 4-1, and Pardew was dismissed later that year anyway.