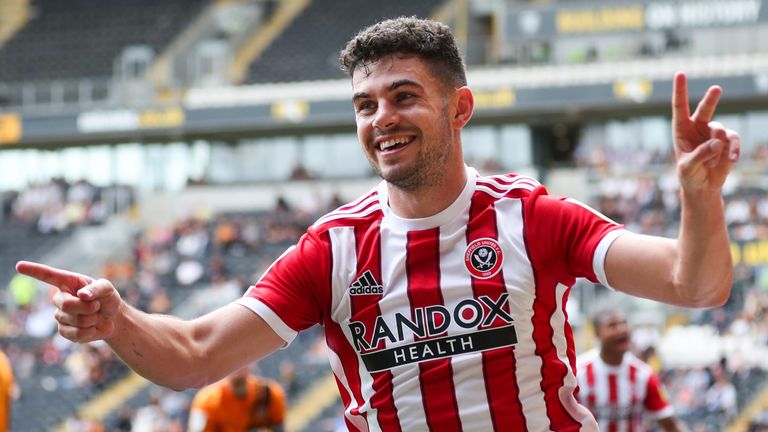 John Egan was the unlikely match-winner for Sheffield United as the Blades strolled to a 3-1 win against Hull at the MKM Stadium.

Billy Sharp's header - on his 300th appearance for the club - set the visitors on their way (17) and after the veteran striker had a penalty saved by Matt Ingram, defender Egan struck twice to extend their advantage (50, 61).

A close-range finish from Keane Lewis-Potter prevented the Tigers from setting a club record of seven consecutive league games without a goal (74), yet it proved to be nothing more than a consolation and one to spare their blushes.

Ahead of the remainder of Saturday's fixtures, the Blades' second victory in a week lifts them into the top half of the table for the first time this season, while a fifth defeat from eight games sees Hull drop into the bottom three.

Both teams were lingering close to the relegation zone ahead of kick off, having failed to kick-start their seasons. The Blades thought they had done just that with a 6-2 win over Peterborough last Saturday, before being held by Preston in midweek, with Grant McCann's men seeking to avoid setting that aforemtioned unwanted record.

Following a relatively even start, where both goalkeepers were tested, it was the visitors who struck first. George Baldock's neat pass set Morgan Gibbs-White free on the right flank, and he lifted in a cross to the back post, where Sharp powered in a controlled header.

Though they had the advantage, Sheffield United didn't take the game by the scruff of the neck and were let off the hook within a matter of minutes, when Josh Magennis muscled his way into the box and laid the ball just a yard behind Lewis-Potter, allowing Baldock to nip in and clear.

Long distance efforts from Richie Smallwood and Lewis Coyle failed to help the Tigers back into the game and they were almost left with a mountain to climb when Sharp won a penalty after a foul by Jacob Greaves, only for 'keeper Ingram to come to the rescue and make a strong low to keep out the frontman's spot-kick.

Five minutes after the break, they did add a second. Neither side had scored from a corner in their previous seven league encounters this season, yet Egan chalked up the first for the Blades when he peeled away from Mallik Wilks and directed a header into the back of the net. And it was over on the hour mark, when the Irishman glanced in from a corner at the near post.

Lewis-Potter's first goal since the opening day - and Hull's first in more than 10 hours - reduced the deficit going into the final 15 minutes, during which former Blade Tyler Smith had a goal ruled out for offside, but it wasn't enough to set a late comeback in motion.

Man of the match - Morgan Gibbs-White

"He is making a world of difference to the creativity of this team. He is always available, covered every blade of grass and was the best player on the pitch."

Sheffield United are next in action at 7.45pm on Tuesday, September 21 when they host Southampton at Bramall Lane in the Carabao Cup third round, while Hull return at 3pm on Saturday, September 25 when they travel to the bet365 Stadium to face Stoke.