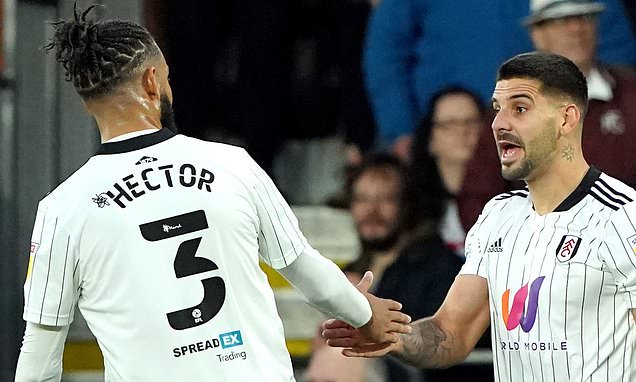 Fulham moved to the top of the Championship after Aleksandar Mitrovic’s 21st goal of the season ensured Marco Silva’s side carried on where left off before the international break to register a seventh successive win.

Mitrovic’s header and a fine individual effort from Fabio Carvalho gave the Cottagers a two-goal half-time lead they were never going to squander against struggling Barnsley.

Neeskens Kebano added a 72nd minute third and when Victor Adeboyejo got one back for the visitors, Harry Wilson wrapped up the one-sided victory that meant Silva’s men took full advantage of the opportunity to leap-frog Bournemouth ahead of the Cherries visit to Derby on Sunday.

Barnsley were watched from the stands by new boss Poya Asbaghi - who takes formal charge on Monday - and the presence of the incoming head coach initially appeared to give the visitors a lift.


A rising drive from Romal Palmer forced Fulham keeper Marek Rodak to make the first meaningful save of the game but any optimism generated by a positive start soon disappeared.

Fulham may not have been at their fluent best, they soon discovered they didn’t have to be to trouble the Championship strugglers’s defence.

Mitrovic came close to connecting with Kenny Tete’s downward header and Michael Hector was unlucky to see a shot bounce clear off the inside of the post.

It came as no surprise then when Mitrovic made the breakthrough in the 24th minute after out-jumping defender Michal Helik to head home from Tete’s cross.

Barnsley’s early confidence had disappeared and they were fortunate to escape when Callum Styles’s misplaced back-pass almost caught out keeper Bradley Collins.

Fulham didn’t need any help, though, and they soon doubled their lead when Carvalho added the 34th minute second.

The teenager produced an exciting burst of pace to take him past three Barnsley defenders.

And after benefitting from a fortunate deflection after playing a one-two with Mitrovic, Carvalho drilled a low shot past Collins for his fourth goal of the season.

Fulham might have reached half-time backed by an even more commanding lead had Harry Wilson made more of two good chances before the break.

And immediately after the restart, Tom Cairney’s shot was deflected against the bar before Mitrovic drew a fine save from Collins from the resulting corner.

Kebano finally added the third from Wilson’s cross who produced a superb controlled finish in the 81st minute after Adeboyejo had struck three minutes early, following up after Cauley Woodrow’s header struck the post.