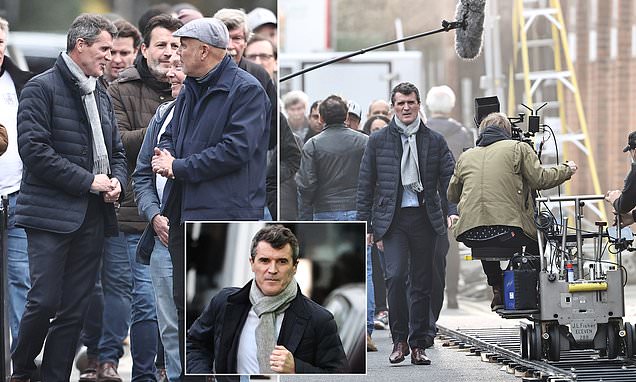 He may have clashed with a Manchester United supporter last weekend but Roy Keane does have a softer and more polished side - even if it is rarely seen.

Keane was spotted outside Craven Cottage, Fulham's stadium, filming an advert for Sky Sports, who he works for as a pundit and is renowned for his no-nonsense approach.

The legendary United midfielder was spotted chatting away to extras and other people watching on before taking on his acting duties, running down the streets around the Fulham stadium in West London.

Keane looked in good spirits, chatting and laughing away to the extras and onlookers while he filmed the advert outside Fulham's Craven Cottage stadium

While it isn't known precisely what role Keane was playing in the advert, the scene around him appeared to recreate a matchday with fans flocked around the stadium shortly before kick-off.


It comes in the aftermath of Keane filmed arguing with a United supporter after the club's dismal 2-0 defeat against Manchester City at Old Trafford in the Premier League.

The 50-year-old was signing an autograph for a supporter outside Old Trafford when another approached appearing to criticise him.

Keane then responded: 'What am I trying to do? Hang around all day and sign autographs? I've signed autographs!'

The fan then responded: 'Why are you being like that?' to which Keane angrily said with his arms open: 'Like what? Like what? What did I do?'

The supporter jibed: 'An absolute pr***' which angered Keane even more.

The former United midfielder took a couple of steps forward saying: 'Oh, because you've had a few drinks and they (United) got beat you're taking it out on me? What's that got to do with me?

'You've had a few drinks, I can tell. What have you had, two pints? Tell all your mates not to lecture me.'

United are sixth in the Premier League table, five points outside the top four after Saturday's 2-0 defeat by fierce rivals Manchester City.

Their Premier League campaign resumes after the international break on November 20, away against Watford.