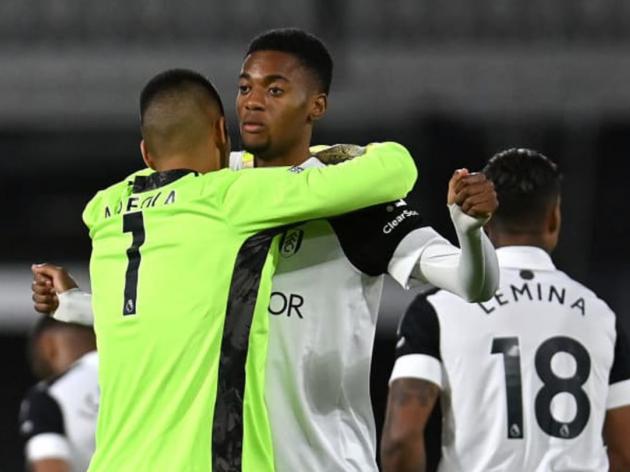 Manchester City cruised to a 3-0 victory over Fulham on Saturday evening, bouncing back in style from their shock defeat in the Manchester derby.

The two teams played out an even yet entertaining first half, with neither side having a golden opportunity to break the deadlock.

The second-half starts with a bang! ?

John Stones arriving to guide the ball home from Joao Cancelo's free-kick and give City the lead. pic.twitter.com/j5AGeJU6db

That all changed two minutes into the second half, however, when a Joao Cancelo free-kick caused all sorts of problems in the Fulham defence, and John Stones was on hand to punish some hesitant goalkeeping to nudge the ball over the line.

The hosts suddenly crumbled and a mix-up at the back allowed Gabriel Jesus to double the lead, before Sergio Aguero stroked home a penalty after another defensive calamity - his first goal of the season.

City remained in control for the rest of the game, adding another three points to their growing lead at the top of the Premier League.

Here's the player ratings for both sides.

Alphonse Areola (GK) - 5/10 - Left hopelessly rooted to his line for the opener, allowing Stones to swan in and tap home from inside the six-yard box. Rounded for the second, and couldn't get near the third.

Kenny Tete (RB) - 6/10 - One of the better defenders on display for the hosts, but didn't cover himself in glory either.

Joachim Andersen (CB) - 6/10 - Sold horribly short by Cavaleiro for the second goal, and was unfortunate to see his last-ditch tackle bounce back into danger off his teammate.

Tosin Adarabioyo (CB) - 5/10 - Left trying to protect the entire goalmouth by another defensive calamity, but couldn't stop Jesus firing home. Made a mistake of his own and then brought down Torres for the penalty.

Ola Aina (LB) - 5/10 - Bombed on and looked for overlaps and attacking options, but left his flank open on a number of occasions.

Andre Zambo Anguissa (CM) - 7/10 - Pressed Man City in their own half, robbing Mendy in a dangerous position and rarely allowing Rodri to collect the ball from his centre-backs.

Harrison Reed (CM) - 6/10 - Hustled and bustled around the pitch, but to no avail. The second half passed him by, as it did his teammates.

Mario Lemina (CM) - 5/10 - Did well in cutting passing lanes and keeping Fulham's shape, but struggled on the ball and never looked comfortable under pressure.

Ruben Loftus-Cheek (AM) - 6/10 - Began in the midfield, but later moved to play as a centre-forward - using his physical strength and intelligence to make Man City's backline think.

On the charge | Pool/Getty Images

Ivan Cavaleiro (ST) - 5/10 - Gave Andersen a horribly short pass to try and clear, only for the defender's sliding challenge to rebound off his legs.

63' Switching things up by introducing Mitro to the mix.

Ederson (GK) - 7/10 - Didn't face a shot on target in the first half, but had to keep his wits about him nonetheless. Forced to bravely dive at Loftus-Cheek's feet to smother any danger.

John Stones (CB) - 8/10 - Overlapped and acted as a right-back when Man City were pushed high on the attack. Looked comfortable as ever on the ball, and seemed to relish the challenge of charging at the Fulham backline. Capped it off by breaking the deadlock with a close-range finish.

Ruben Dias (CB) - 7/10 - Calm and commanding as always, leading the backline with typical authority. Such a massive signing for this entire team.

Aymeric Laporte (CB) - 7/10 - Took up a wider position in possession, and never looked troubled in the first half. Second period was even easier than the first.

Getting stuck in | CATHERINE IVILL/Getty Images

Joao Cancelo (RWB) - 8/10 - Thrived in this position, as it gave him the chance to show off his best qualities - his attacking and crossing. Delivered the ball to allow Stones his tap-in.

Rodri (CM) - 7/10 - Anguissa had his number in the first half, forcing Rodri to try and play even quicker when receiving the ball. Second half was much more relaxed for the Spaniard.

Bernardo Silva (CM) - 7/10 - Played in a deeper role and suited it nicely, carrying the ball or pinging it around depending on the occasion.

Benjamin Mendy (LWB) - 6/10 - Doesn't look as calm or technically accomplished on the ball as his teammates. Defensively, his game is still lacking and he risked losing possession on a couple of occasions.

Ferran Torres (RW) - 7/10 - Operated just behind the two forwards at the beginning, then moved wide right as Guardiola shuffled the pack. Looked better in a more comfortable position.

Sergio Aguero (ST) - 7/10 - Still getting up to speed, and bagged his first goal of the season from the spot. Let's hope there's more to come from the Argentine.

Gabriel Jesus (LW) - 8/10 - Seems to enjoy this wider role, where he's not the centre of the scoring attention. Showed some impressive vision to switch the ball and stretch Fulham's defence.