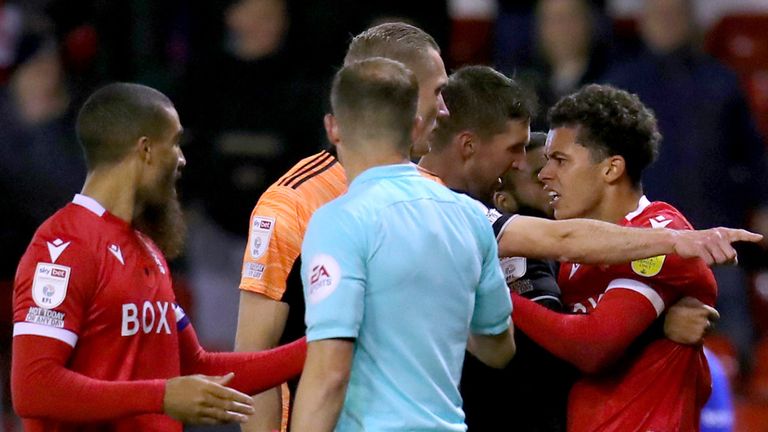 Lewis Grabban came off the bench to rescue a point for Nottingham Forest as old rivals Sheffield United forced a 1-1 draw at the City Ground.

Grabban scored his sixth goal of the season from close range in the 83rd minute, five minutes after fellow sub - and ex-Red - Billy Sharp had set up Morgan Gibbs-White to put the Blades in front with his fifth of the campaign.

It was a closely-contested game between two sides who began - and ended - the evening with identical records in the Championship.

Steve Cooper will have felt his Forest side might have had a penalty when Brennan Johnson was brought down, but Slavisa Jokanovic will have been equally frustrated at not seeing his United team hold out for three points.

Joe Lolley was not too far away from an opening goal as he let fly with the first real effort of the game in the 12th minute, with his low shot bouncing narrowly wide.

It was a cagey opening, with Forest pressing again as United struggled to clear the danger when Djed Spence burst into the box from the right.

Forest should have taken the lead from James Garner's corner, but Lyle Taylor planted a good headed chance wide.

When Chris Basham slid in late on Johnson as Forest attacked down the left side, Forest wanted a penalty. But referee Leigh Doughty was not convinced.

Johnson snatched possession on the edge of the Blades box and he carved out the chance for a shot, but a deflection left Robin Olsen with an easy save.

Brice Samba had to make his first save when he kept out an angled shot from Jayden Bogle.

The first half ended with Joe Worrall flashing a header inches the wrong side of the post for the home side.

The second half continued in the same fashion, with both sides enjoying flurries of possession, without turning those into clear opportunities.

A great ball from Ryan Yates gave Johnson the chance to fire the ball across the face of goal but United desperately cleared.

Forest were livid when Johnson went down under another challenge from Basham in the box, after referee Doughty this time booked Johnson for diving.

Sub Sharp was to play a key role as United took the lead. He turned creator by firing in a perfect ball for Gibbs-White, who slotted home simply but emphatically in the 78th minute.

But their lead was to last for only five minutes. Sub Grabban had already come close to scoring once, and when he got himself into the right position for a second time he forced the ball over the line from close range, after United had failed to clear a cross from Johnson.