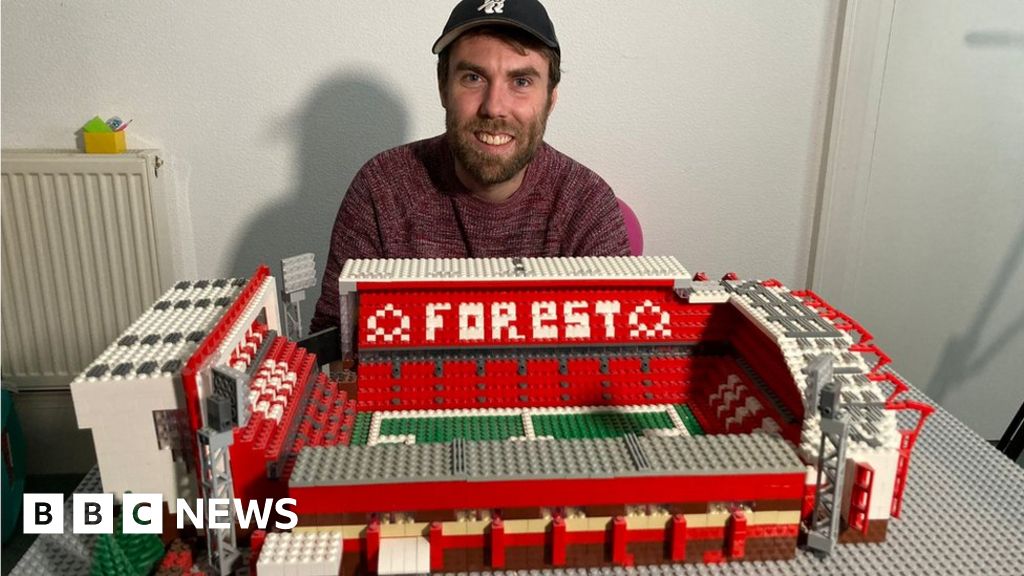 A football fan who built a Lego model of his club's stadium has said he is "extremely excited" that it will feature in a match-day programme.

Jonny Heald said he started to build Nottingham Forest's City Ground during lockdown having previously attempted it as a child.

Mr Heald's 5,000-piece handiwork is set to feature in the programme for the Championship game against Fulham later.

He hopes it will one day go on display at the ground.

Image caption, He was inspired after seeing the stadium as a child in the 1990s

The 36-year-old said he first tried to recreate the stadium as an eight-year-old in 1994, after seeing his first Nottingham Forest home game.

"I fell immediately in love with its uniqueness," he said.

"Back then, I had far less bricks at my disposal so I often ended up with a technicolour Trent End."

Image caption, Nottingham Forest's City Ground is on the banks of the River Trent

The primary school assistant head teacher, from Repton, Derbyshire, said during lockdown in June he wanted to rekindle his childhood and started to build a more accurate ground with his two children.

A season ticket holder for more than 20 years, Mr Heald said he mainly built it from memory but "grossly underestimated the task in hand".

After hours spent researching the stadium on Google Maps and scouring the internet for specialist pieces, three months later the model was complete.

He said after an "overwhelming" response on social media he was contacted by Nottingham Forest.

"It's extremely exciting the model is being recognised by the club," he said.

He now hopes it could be displayed at the ground.