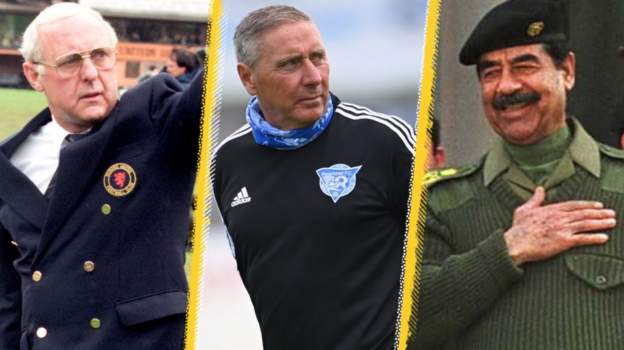 Shaking hands with "tyrants" Saddam Hussein and Margaret Thatcher, and working under legendary pair Brian Clough and Jim McLean, have been the making of Scotland's longest-serving manager.

But it is typical of a career built on his own under-stated style, gritty determination and hard work that Jim McInally is leaving others to celebrate his 10 years in charge of Peterhead.

Now 57, McInally tells BBC Scotland he has no regrets about rejecting the opportunity to subject himself to the high-profile pressure that mounted on his mentors to instead concentrate his efforts on keeping his side among the best of Scotland's part-time clubs.

Despite considering it "special" to have played under European Cup-winning Clough at Nottingham Forest before helping McLean turn Dundee United into Scottish title winners and Uefa Cup runners-up, it is another footballing great who McInally regards as his hero in management.

European Cup-winning captain and title-winning manager Billy McNeill gave McInally his Celtic debut as a left-back before his switch to defensive midfield with United and Scotland.

"A fantastic man, a fantastic character and I feel he is sometimes overlooked," he says. "But I can understand why Clough and McLean get people talking because of the characters they were. Football-wise, very similar, but in personality you couldn't have met two such different people."

McInally recalls that, after leaving Celtic for Forest in 1984, Clough invited him to spend Christmas with his family.

"First and foremost, he was a good human being - something a lot of people tend to overlook," he says. "He knew I was alone and staying in a hotel in Nottingham and he didn't want that to be the case."

McLean, though, ruled with an iron fist as his side - along with Aberdeen - broke the dominance of Celtic and Rangers.

"I'm past the stage where I call him a great manager, because he wasn't," McInally admits.

"He was a brilliant coach, brilliant tactician and was years ahead when it came to winning matches, but if he could man-manage a bit better, he would have been another four or five trophies up on his actual count."

Shaking hands with Saddam and Thatcher

One of McInally's strangest experiences came when Forest played a friendly against an Iraq side preparing for the 1986 World Cup finals - a trip Clough ducked out of.

"Iraq was at war with Iran and it was a trip none of us were looking forward to," he recalls. "We spent much of the time in the British Embassy to stay safe and, when you went back to your hotel room at night, you were lying listening to shell fire.

"At the game, we had to wait for Saddam Hussein to come on the park surrounded by his gun-toting security."

McInally recalls that his brush with the Iraqi dictator was also followed by a similar handshake with a sitting British Prime Minister.

"Unfortunately, we also had to meet Maggie Thatcher in the 1988 Scottish Cup final, so there's two tyrants there," he says.

McInally believes the legacy of success created by Clough and McLean have weighed heavily on Forest, who have languished in the Championship since their greatest manager's departure, and United ever since.

"It's probably been a burden for a generation or two for managers and chairman aspiring to get back to those days," he says.

"The reality is they need to stop looking for that and need to just embrace what they've got at the minute because it's hard to imagine that those days will ever come back.

"It was something I decided early in my managerial career - it wasn't really for me to put myself under that pressure to be successful like that."

Rapport with chairman is key

McInally began his own managerial career with Sligo Rovers in Republic of Ireland before spells with Greenock Morton, East Stirlingshire and now Peterhead.

The Aberdeenshire side were relegated to Scotland's bottom tier after his first six months in charge, they have been promoted, relegated then promoted again since and sit second bottom of League 1 despite Saturday's 5-0 thumping of Dumbarton.

"It's not something that excites me, but I suppose it's something to be proud of," McInally says as he marks his 10th year in charge. "Other people seem to be celebrating it a bit more than me - I'm just concentrating on trying to win games.

"Regardless of whether it's your first year or 10th year, you've just got to make sure that you do your job because you've got to keep proving yourself in this job."

So what is the secret to McInally's longevity at Balmoor Stadium?

"The biggest lesson is to make sure you have a good rapport with your chairman and your board - that's the key to getting time," he suggests.