Crisis on Brian Clough Way: how rivals Derby and Forest are united in pain
The Guardian 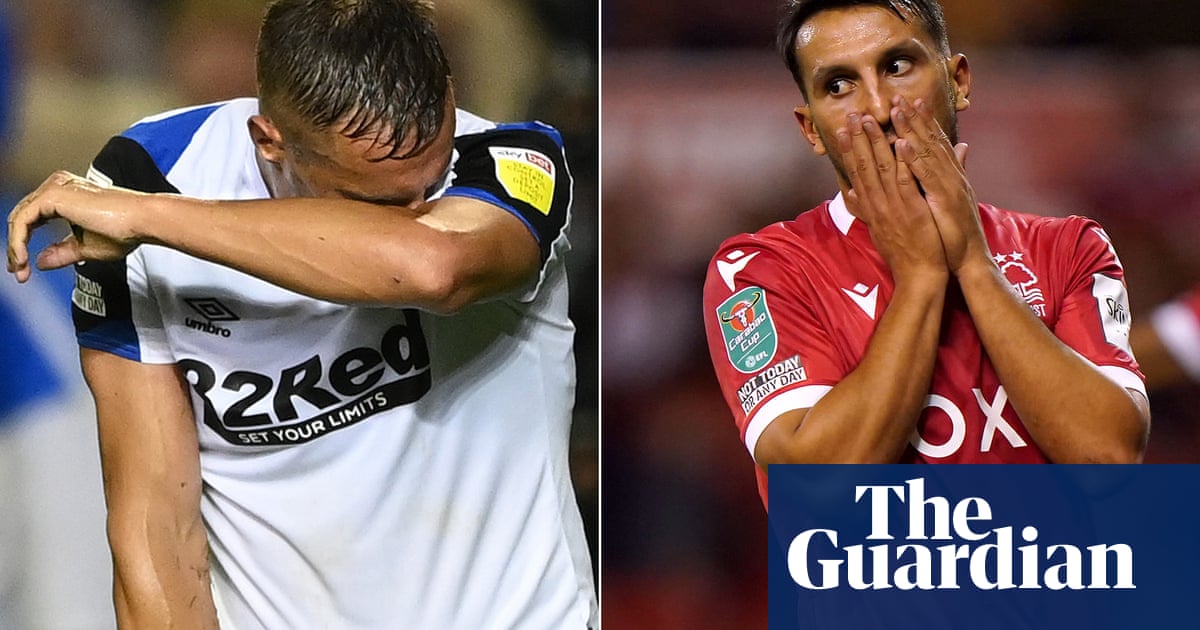 It was a scene Derby County supporters had been dreading, one that made everything depressingly real. The setting – the club’s Moor Farm training base – and backdrop – an advertising board filled with a myriad of sponsors – were familiar, only in the foreground it was not Wayne Rooney talking team news but administrators telling how they plan to dig Derby out of the mud. Less than 24 hours after the club had plunged to the bottom of the Championship, Andrew Hosking and Carl Jackson, insolvency specialists in suits and ties, shuffled into position and delivered a cautiously optimistic opening gambit.

Derby are clinging to such hope amid the disconcerting headline numbers, minus points and debts north of £60m. They owe HM Revenue and Customs at least £26m, Arsenal transfer fees from the £10m deal that made Krystian Bielik the club’s record signing, the former manager Phillip Cocu compensation and they are losing about £1.5m a month. Last week Quantuma, the administrators first engaged a month ago, analysed the “operational efficiencies” to determine the scale of redundancies required and on Monday Steve McClaren voluntarily stepped down from his role as technical director “to help preserve other jobs across the football club”.

A glance at the table makes grim viewing for both of the teams that bookend Brian Clough Way, with Derby seven points behind their east Midlands rivals Nottingham Forest, who are also in the relegation zone. Derby have won two league games, Forest just the one, but with the former set for an extra nine-point deduction for breaching the English Football League’s profit and sustainability rules, realistically only one have a chance of getting out of trouble. “They are two teams that should not be anywhere near the bottom three,” says the former Forest and Derby striker Robert Earnshaw, who in 2008 became the first player this millennium to move directly between the clubs. “As much as they are both in the bottom three now, they could start going in two different directions. Derby need a miracle but Forest are probably more optimistic than a couple of weeks ago.”

Unsurprisingly, the Forest owner, Evangelos Marinakis, acted on a poor start, sacking Chris Hughton after one draw and six defeats in their opening seven games – with Brennan Johnson rescuing that point at Derby last month. It left Forest looking for a sixth permanent manager in four years; or more accurately a head coach who would focus on developing players and not, as one source says, “deciding which colour of paint should be on the dressing room walls”. The arrival of Steve Cooper, a coach earmarked for Premier League jobs after guiding Swansea to successive play-off finishes, represents a coup.

Cooper exceeded expectations on a modest budget at Swansea and used the loan market to his advantage, borrowing Conor Gallagher and Marc Guehi, who have impressed for Crystal Palace in the Premier League this season. Forest have a bloated squad – past expensive mistakes hindered summer business – but Cooper will improve young players such as Alex Mighten, and Johnson, who has enjoyed a couple of star turns this season by using his pace to devastating effect, should continue to flourish.

Steve Cooper (centre) oversees a 1-1 draw at home to Millwall in his first game in charge of Nottingham Forest. Photograph: Isaac Parkin/PA

Cooper has added two members of staff from his Swansea tenure in Alan Tate and Stephen Rands, an analyst who worked under Roberto Mancini and Pep Guardiola at Manchester City, and Steven Reid, who assumed caretaker charge for Forest’s sole league win, is continuing as an assistant coach. “I was lucky enough to speak to Steve Cooper a few times over the last year when he came and did a couple of presentations for us on the Uefa pro licence [course],” says Earnshaw. “He discussed how he handles things, how makes decisions, things that go on day-to-day. I got to see how he works. He’s a good manager and very driven. I think he is going to do well and enjoy the club. He is a hard-working guy with good ideas.”

Forest, who visit Barnsley on Wednesday, hope they have found the right blend but Derby, who host Reading, have bigger and more complex short-term problems. Earnshaw recalls Forest fans attending his games in Vancouver, Chicago and Israel – “there is a supporters’ group I get invites to in Brazil” – but rich history and the global pull of the clubs count for little at present. “A couple of years ago, Derby appointed Cocu, Rooney came in as a player-coach and it seemed they were looking at the Premier League and building from that,” he says. “Now they will be lucky to even be in a position where they can even think about coming up from the league below.”

Wayne Rooney’s popularity at Derby has rocketed given the way he has handled a challenging situation. Photograph: Barrington Coombs/PA

Rooney has handled a challenging situation with class and while the popularity of the Derby owner Mel Morris has plummeted among supporters, Rooney’s popularity has increased tenfold. He asked to sit in on the administrators’ meeting with the Derby County supporters’ trust last week and has reaffirmed his commitment to the club. Rooney has coped admirably with the sideshow but Cooper, who studied footage of Forest’s past matches before taking the job, knows there is only one way to win Forest hearts. “It is a set of supporters that really get behind the team and we have to make sure we do our bit on the pitch so they can do that,” Cooper said after Saturday’s draw against Millwall. “It has really whetted my appetite.”