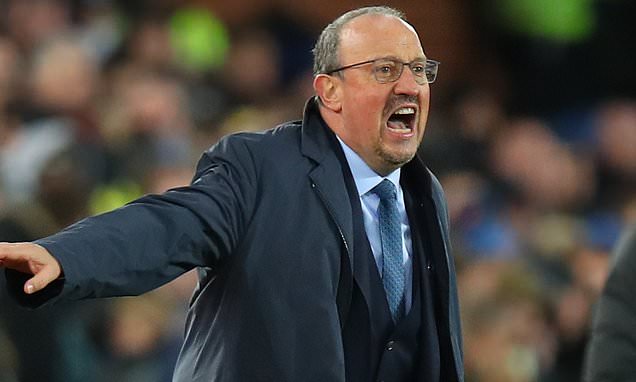 Everton's squad must stick together amid an eight-match winless run in the Premier League, manager Rafa Benitez said on Friday, stressing that their dip in form was not due to a lack of commitment.

Wednesday's 4-1 defeat by local rivals Liverpool condemned 14th-placed Everton to their third straight loss and sixth in seven matches to heap the pressure on their manager, who had an illustrious past with the team's Merseyside neighbours.

With bookmakers on Thursday saying Benitez was favourite to be the next top-flight manager to be sacked, the 61-year-old suggested they could bolster the squad in the January transfer window to arrest their slide.

Everton's squad must stick together amid an eight-match winless run, Rafa Benitez insists

'Now is a time we have to stick together, go into January in the best position we can,' Benitez told reporters.


'You can complain about our mistakes, quality, things like that - but not commitment. We must work really hard.

'Why am I still positive? Because we did it at the beginning. You can't be a bad or good manager in one week.

'If the team was really good, signed two wingers, made crosses - we can't be wrong in everything after six weeks.

'My main thing is to concentrate on football issues, analyse the mistakes. I don't want to blame individuals, we win or lose as a group.

'We know the problems, the club has been changing managers for a while and it wasn't changing the situation.'

Everton face a tricky test against fifth-placed Arsenal on Monday, with Mikel Arteta's side looking to respond to their midweek 3-2 defeat by Manchester United.

Defender Yerry Mina, who has been out since October with a hamstring injury, and forward Salomon Rondon (knock) could be in contention to play.

Striker Dominic Calvert-Lewin is two weeks away from a return following a quadricep issue.