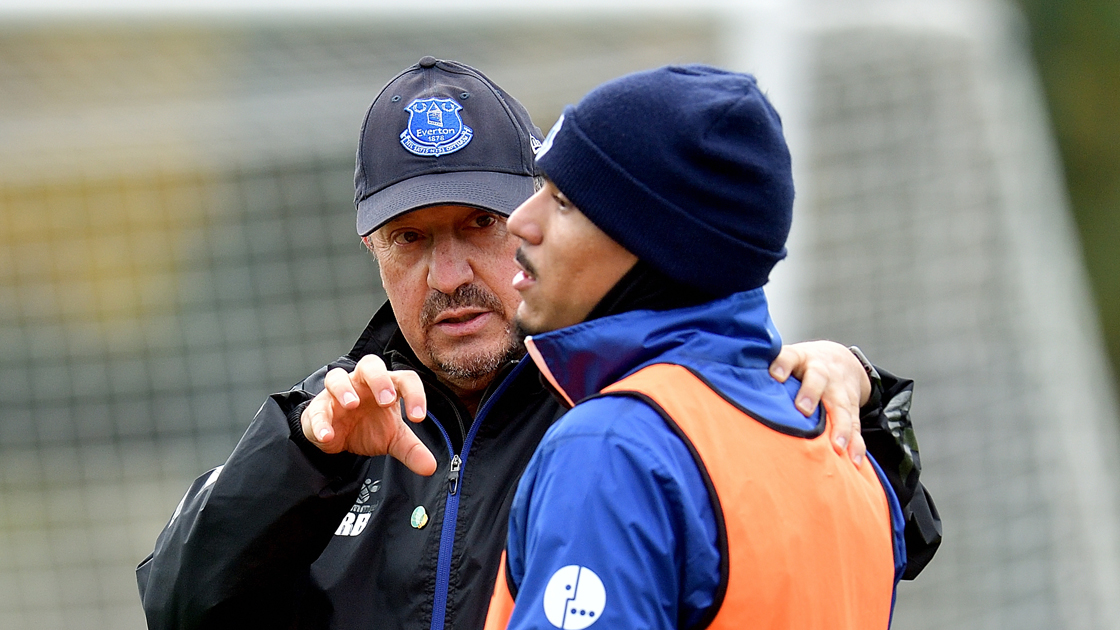 Rafa Benitez says it is imperative for everyone at Everton to “stick together” to reverse results and generate forwards momentum.

The unproductive run over the past two months, prompted by a spate of injuries to key personnel, has led to a 10-position drop in the Premier League standings.

Manager Benitez, encouraged by his team’s application and determination to right wrongs, is convinced Everton will begin recovering ground in short order.

Defeat by Liverpool on Wednesday, he admitted, was a hurtful blow, owing to the identity of the opponents.

There were no qualms about Everton’s togetherness on the field, however, and that attribute will count for a lot against Arsenal, insists Benitez.

He said: "I have experience in situations like these, to fight for titles and to try to avoid relegation.

"And my experience is telling me to stay calm, to keep working hard, to try to correct the mistakes, then keep going.

“What we want is to stick together because that is crucial.

“It is a frustrating time for us, but we have to keep going and work really hard.

“When you are in a bad run, every game feels must win.

“I am positive and still have the belief we will do well because we did it at the beginning of the season.

“I said lot of times that we will do well in the second part of the league.

“Now is a time for us to stick together and try to go to January in the best possible position.”

Benitez started his Everton reign with three straight home wins, in addition to draws at Leeds United and Manchester United and a win against Brighton & Hove Albion in the opening four away fixtures.

A problem for talismanic striker Dominic Calvert-Lewin, who scored in each of his side’s three matches from the start of the season, began a run of dreadful misfortune with injuries.

Richarlison, Abdoulaye Doucoure, Lucas Digne, Andre Gomes and Tom Davies have all endured time out the side.

Yerry Mina, a relatively long-term absentee, has a puncher’s chance of facing Arsenal.

My experience is telling me to stay calm, to keep working hard, to try to correct the mistakes, then keep going. What we want is to stick together because that is crucial.

The reduced options eventually bit and Everton were pulled into a vortex where results spiralled and confidence suffered accordingly.

Restoring that self-belief, claims Benitez, is essential for a turnaround.

“You have to do the basic things well [to lay foundation], then, little-by-little, we can build on that,” said Benitez.

“We have to be solid and strong and defend and work as a unit.

“After, if you get one or two results, we will have more confidence and it will be easier.

“With some players coming back, we have more chances to be even more competitive.

“We have to work really hard as a team and try to keep the ball better than we did against Liverpool.

"We were really strong at the beginning of the season. We had a solid defensive unit and played good counter-attacking football.

"We need to go back to those principles and not make mistakes which will allow teams the chance to punish us.

“When something is wrong, it is really important to show character and stay calm.

“When you are under pressure and anxiety is there, you make more mistakes.

“Stay calm and keep working, work harder, if possible. That is what I am trying to do with my staff and it is the message for the players.”

“We have been talking about that but it is time to concentrate on what we can do every week,” responded Benitez.

“We need prepare for Arsenal and bring back injured players, improve the fitness of everyone and improve our game.

“But we need to know the players [Everton target] want to come.

“If we don’t want to sell players, we don’t need to.

“I think the players appreciate we are trying to improve and that is what we will do until the end.”