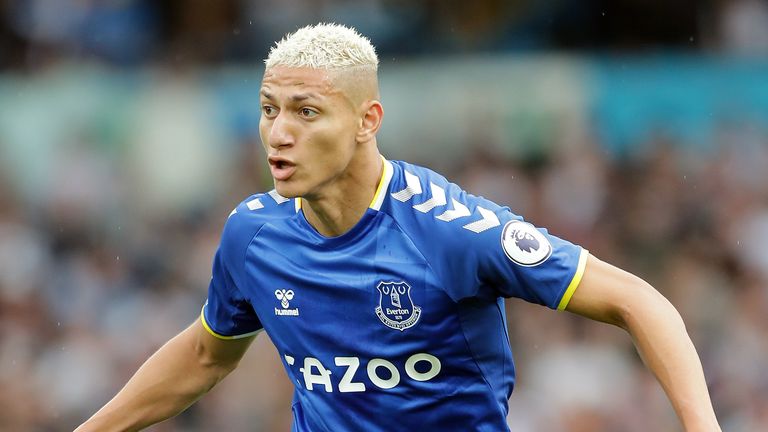 Team news, stats and prediction ahead of Everton vs Liverpool in the Premier League on Wednesday; kick-off 8.15pm.

Everton forward Richarlison returns from suspension for the Merseyside derby visit of Liverpool.

Midfielder Andre Gomes is back in training after a calf problem but is unlikely to feature in the Premier League clash.

Jurgen Klopp says Virgil van Dijk has been superb for Liverpool since his return, as the defender prepares to go back to Goodison Park where he suffered a serious injury last season

Liverpool manager Jurgen Klopp will be selecting from an unchanged squad.

Centre-back Joel Matip looks set to return after being rested at the weekend for Ibrahima Konate.

Follow Everton vs Liverpool in our dedicated live match blog. Highlights will also be published on the Sky Sports digital platforms and the Sky Sports Football YouTube channel after full-time.

FREE TO WATCH: Highlights from Brentford's win against Everton in the Premier League

FREE TO WATCH: Highlights from Liverpool's win against Southampton in the Premier League

It's hard to see how Everton can truly rattle Liverpool in this one. Jurgen Klopp's team are masters at standing up to a physical confrontation so the Goodison Park factor should not play a part. The counter-attack could be their only ray of light but, since the opening few weeks, even those kind of attacks have fallen flat.

Away win, simple as.

We need to talk about the Liverpool offside trap though. It really is a thing of beauty.

They have caught 57 players offside in total this season, at least 21 more than any other side.

Although the offside trap is one of Liverpool's strengths as it suffocates teams, it can also be their weakness - as shown perfectly by West Ham in their 3-2 victory. Rafa Benitez will be encouraging quick balls into space behind the Liverpool back four and will surely be picking Richarlison to lead the line. The Brazilian opened the scoring in the 2-0 win at Anfield last season, latching onto a James Rodriguez through pass.

That predicted method of attack makes the Everton offside lines very appealing. With Liverpool catching teams offside 4.3 times per-90 minutes this season, that makes Richarlison, who was flagged twice in the fixture at Anfield, a smart play at 15/8 with Sky Bet to be caught offside three times.