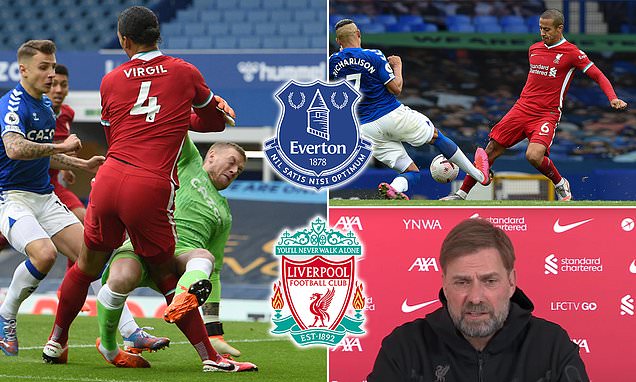 Jurgen Klopp quashed an innocuous question about his comments on derby games ahead of the clash at rivals Everton on Wednesday.

The Liverpool boss lost two key players, in Virgil van Dijk and Thiago Alcantara, to long-term injuries during the fixture at Goodison Park in October 2020.

Van Dijk's ACL injury, after Everton keeper Jordan Pickford's erratic and unpunished tackle, was season-ending and after the win against Southampton on Saturday, Klopp said he 'very often doesn't like the intensity of the (derby) game, it's too much for me.'

Yet ahead of the clash at Goodison tomorrow, Klopp was in a snappy mood on Tuesday when asked to elaborate on his comments, saying: 'No because you are all not able to write it in a proper way.


'I have nothing else to say about it. I said what I said. And that's it. From that moment on, I prepare as normal for a football game.'

In full, Klopp told Sky Sports at the weekend: 'It's always a completely different game, so I really very often don't like the intensity of the game, it's too much for me.

'I like physical football, I have no problem with that, we play that, other teams play that, but in that game very often people put too much in. I can't say it's my favourite game of the year to be honest, because of that.

'But we have the chance to watch Everton tomorrow, we will prepare for the game and will try to make a normal but good football game.'

In the same game as Pickford's clash with Van Dijk last October, Everton forward Richarlison was sent off for a rash tackle on Thiago, who missed the next ten league games.

Despite not being a major fan of the fixture, Klopp has an impressive record against Everton, having won seven, drawn five and lost just one of his 13 games versus the Toffees.

Yet his side have not won at Goodison Park since the 2016-17 season, with the last four league clashes ending in draws.