From bust-ups, to flying pizza and two-finger salutes - most fiery games ranked
TalkSport 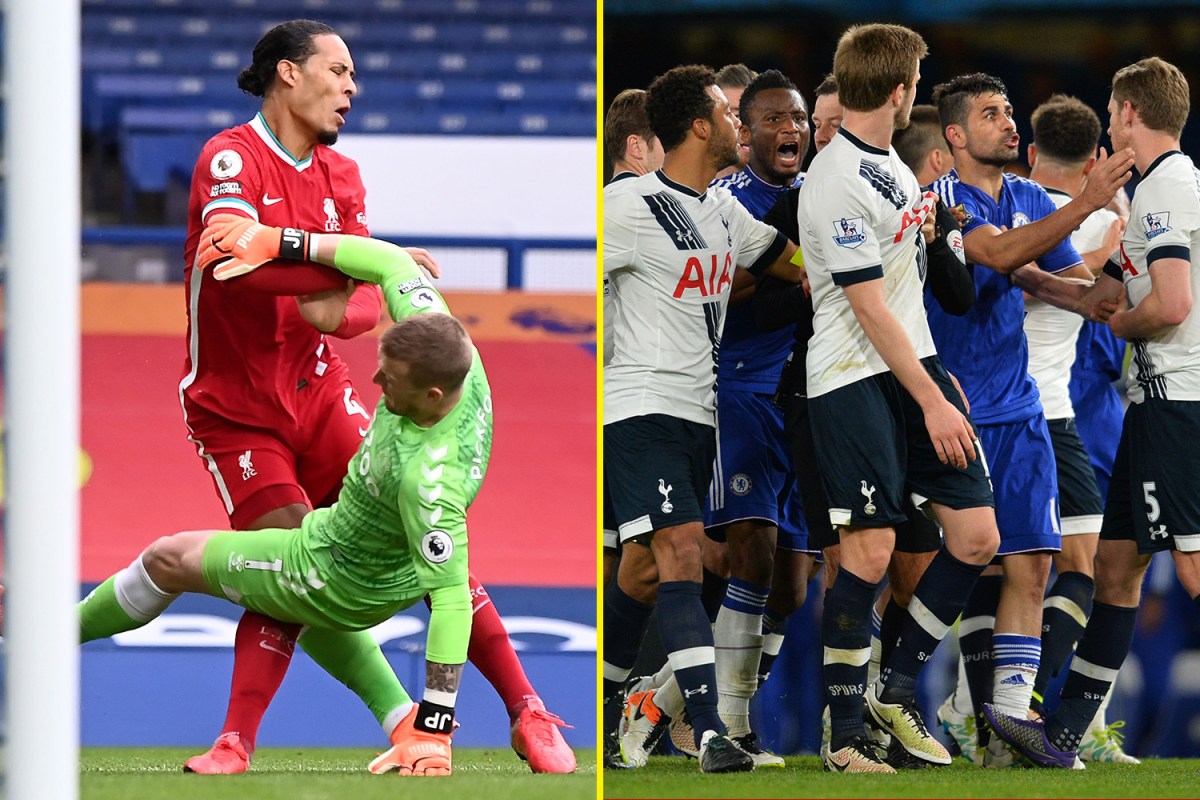 Passions will run high at Goodison Park when Everton take on Liverpool in the 239th Merseyside derby.

The latest instalment in this bitter rivalry sees the Reds heavy favourites to win with their rivals in very bad form but there will be an extra feisty edge to this one.

Rafael Benitez will take on former club Liverpool for the first time since the shock announcement that he would become Everton manager.

Last season’s Goodison Park clash was played without fans but there was a nastiness to the contest with Virgil van Dijk missing the remainder of the season following a wild tackle from Jordan Pickford.

Meanwhile, Richarlison was sent off for a dangerous lunge on Thiago Alcantara, a challenge that left the Reds midfielder sidelined for over two months.

It’s the dirtiest fixture in Premier League history given it has seen 22 red cards – more than other game. After Liverpool’s win over Southampton at the weekend, Liverpool boss Jurgen Klopp revealed he doesn’t like the aggressiveness that Merseyside derbies throw up.

“It’s always a completely different game, so I really very often don’t like the intensity of the game, it’s too much for me,” Klopp said.

He may have a point when you look at how bad-tempered other Merseyside derbies have got over the years.

talkSPORT.com looks at other Premier League matches that really got out of hand, ranking the five fieriest.

Red cards are a common occurrence when Everton and Liverpool face each other but three dismissals in one match really is quite something.

Kevin Campbell’s early goal proved to be the decider but he was later on the receiving end of a shocking late tackle from a young Steven Gerrard, who was rightly sent off by Mike Riley.

That was after the referee had sent off both Sander Westerweld and Francis Jeffers for an off-the-ball scrap that wouldn’t have looked out of place in a boxing ring.

So much for it being the ‘friendly derby’…

Having a punch-up during a match is thankfully a rarity in football but every so often tempers flare a bit too much.

You don’t often see two players from the same side going for each other though, but that happened during a Newcastle vs Aston Villa clash when Magpies teammates Lee Bowyer and Kieron Dyer had to be separated by players before both were sent off.

The match, which Villa won 3-0, saw Newcastle finish with eight men as defender Steven Taylor was red carded for deliberately blocking a goalbound shot with his hand – the incident being made all the more comical by the defender’s attempts to trick the referee into thinking the ball struck his midriff as he feigned an injury, poorly.

Bowyer and Dyer inexplicably fought each other on the pitch

Manchester United and Arsenal were the two best teams in the land in the late 90s and early 00s, so feisty clashes were inevitable.

They reached boiling point in September 2003 when the end of a goalless draw at Old Trafford sparked an on-pitch brawl between both sets of players with Martin Keown jumping on Ruud van Nistelrooy, who missed a great chance to win the match as his late penalty struck the crossbar.

The Dutchman had the last laugh the following season as his penalty helped the Red Devils secure a 2-0 win over the Gunners, ending their unbeaten run in the Premier League at 49 matches.

But it’s the memories of the events down the tunnel after the match that live on as a fight between both sets of players broke out.

In the melee a slice of pizza hit Sir Alex Ferguson in the face and after many accounts suggesting that was the work of Cesc Fabregas, the Spaniard admitted he threw it at the legendary Man United boss.

At a time where Arsenal were very much the dominant force in north London, a win for Tottenham against Arsene Wenger’s men was a huge shock.

Steffan Iversen and Tim Sherwood put Spurs 2-0 up before Patrick Vieira pulled one back just before half time.

Spurs, then managed by former Gunners boss George Graham, held on for the win but things took a bad turn in the second half with Keown and Freddie Ljungberg both being sent off.

Somehow there were no red cards in this one but it tops our bad-tempered Premier League clashes chart.

With Leicester on the cusp of claiming an incredible first Premier League crown, Tottenham knew anything less than a win at Chelsea would do.

They started brilliantly as they raced to a 2-0 lead at half time but goals from Gary Cahill and Eden Hazard sealed the Foxes the title.

Pretty much every player had their own individual scrap, while Mauricio Pochettino was involved in one melee and referee of the night referee Mark Clattenburg even admitted he ignored some red card offences on that fateful night.

Just one of the many crazy confrontations that happened that night