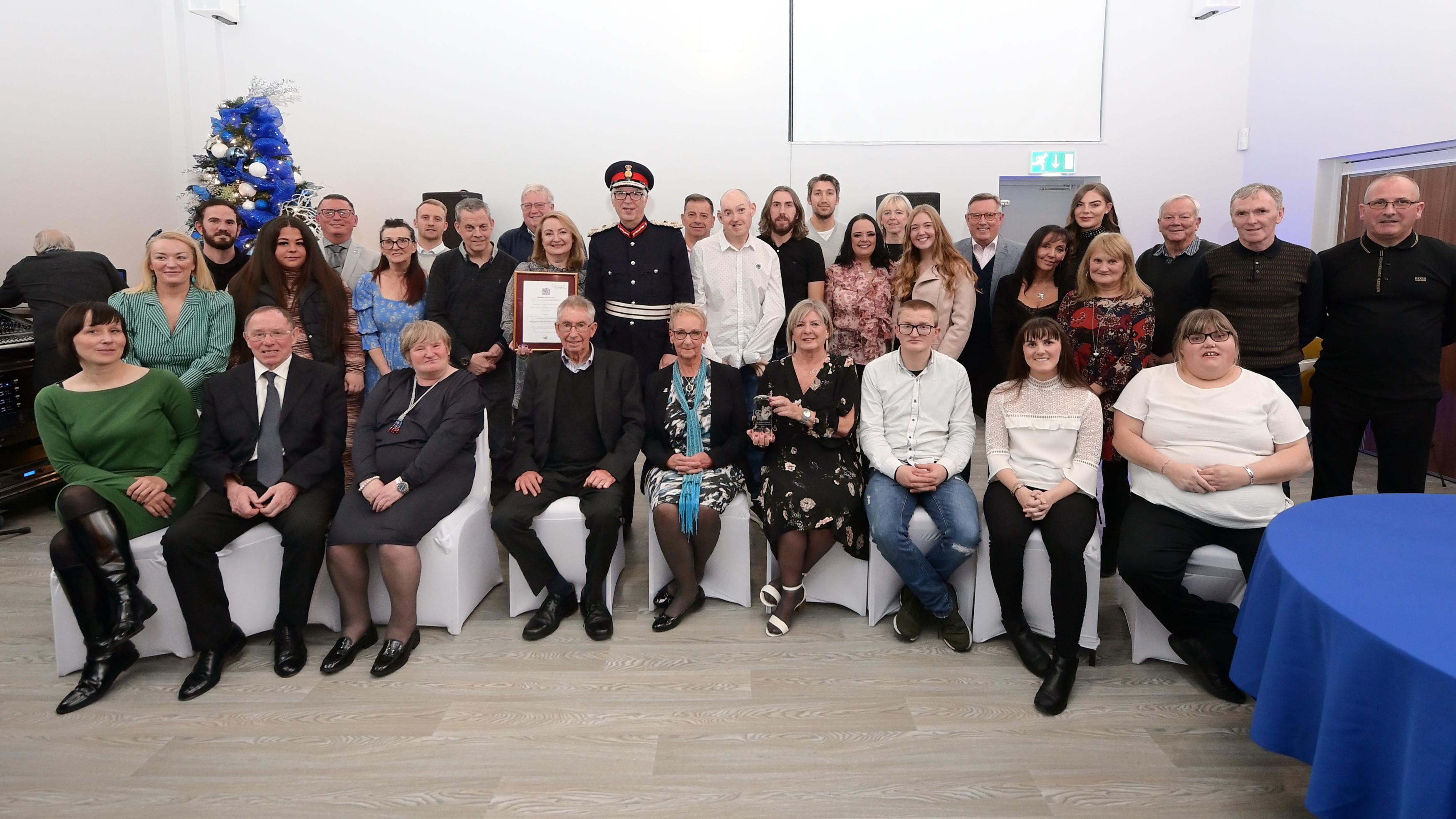 Everton in the Community was officially presented with the Queen’s Award for Voluntary Service (QAVS) at a prestigious event at The Blue Base on Friday night.

Equivalent to an MBE, QAVS is the highest honour a volunteer group can receive in the UK. Presented by Her Majesty’s Lord-Lieutenant, Mr Mark FW Blundell, Everton in the Community received the award in recognition of the role and impact the charity’s volunteers have made across Liverpool and beyond.

Sitting alongside Her Majesty’s Lord-Lieutenant, Deputy Lieutenants Mrs Paige Earlam DL, Mr Nicholas Earlam, Mr Stephen Burrows DL, Mrs Gillian Burrows, Everton CEO Professor Denise Barrett-Baxendale and Clerk to the Lieutenancy, Lieutenant Colonel Sean McEvoy BEM, all of whom witnessed EitC volunteers, Ian Munn and Marie Rimmer step up to collect the accolade on behalf of the charity, in front of their fellow volunteers at a packed-out Blue Base.

In addition to receiving the Queen’s Award, the charity also received a special designation in recognition of the support provided to its local community in response to the coronavirus pandemic.

The room heard speeches from the Lord-Lieutenant, and the Deputy Lieutenant, Mrs Paige Earlam both paying tribute to Everton in the Community and the role and efforts of its volunteers who collectively contribute more than 10,000 hours of volunteer time to their local community each year. This includes supporting the charity’s fundraising such as bucket collections and events as well as dedicating their time to supporting the charity’s 40+ programmes across Merseyside.

More recently, volunteers have been supporting Blue Family, Everton in the Community and Everton Football Club’s outreach and engagement campaign in response to the COVID-19 pandemic, which provided support to more than 31,500 at-risk individuals and families in the region.

Further afield, in 2019, several of the charity’s volunteers took part in a social action outreach project in Nakuru, Kenya, to help renovate two primary schools and install and help fund a water pump for the village.

Speaking on the night, the Lord-Lieutenant of Merseyside was full of praise for Everton in the Community:

“You have a wonderful charity under wonderful premises and the volunteers do a variety of interesting and incredibly helpful things in the community. The criteria (for the award) is you have to be the best. It’s excellence, and we had no problems recommending Everton in the Community.

“Volunteering is one of the most important things in our community. People volunteer in so many ways and Everton in the Community as a whole benefits tremendously from that.”

Everton in the Community’s Volunteer Manager, Adam Howard - who also spoke on the night, paid tribute to the efforts of the volunteers and credited them as a major influence on the charity’s success to date.

“The Queen’s Award for Voluntary Service is regarded as the highest honour in volunteering and is a fitting acknowledgement of our fantastic volunteers. We wouldn’t be where we are today without them.”

To find out more about volunteering at Everton in the Community, click here.