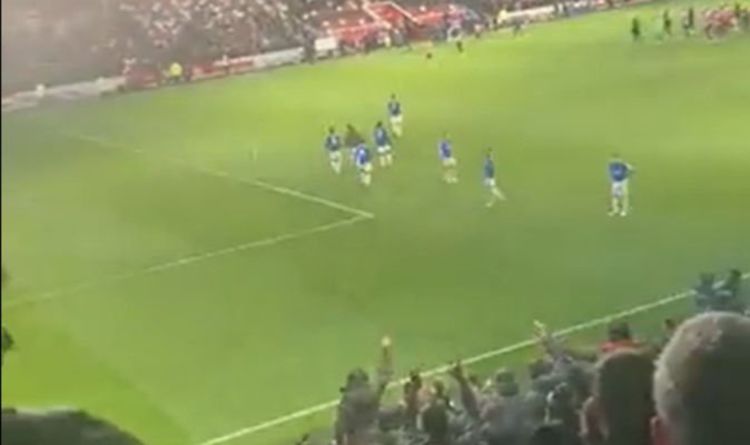 Everton fans did not shy away from making their feelings known to players and staff after defeat to Brentford on Sunday afternoon. The summer appointment of former Liverpool boss Rafa Benitez was divisive in the first place, and with results taking a turn for the worst, the atmosphere has turned sour on the blue half of Merseyside.

A trip to the Brentford Community Stadium represented a good chance for Everton to return to winning ways.

Despite having more shots, more shots on target and more of the ball, it was the home side who came away with a 1-0 victory thanks to Ivan Toney's penalty.

The Toffees are now without a win in over two months as their shocking run of form continues, leaving a promising start to the campaign as little more than a distant memory.

Brentford's win was enough to send the travelling fans, who faced a long and cold journey back up north, into an angered frenzy.

JUST IN: Leeds issue highlighted as 'something is not quite right' between Phillips and Bielsa

A video posted to social media showed the fans furiously venting their anger towards Everton players, who had come to acknowledge them after the final whistle.

Loud boos and hand gestures were directed towards them, and the players were visibly frustrated by the reaction of their supporters.

Benitez now finds himself in a precarious position, not just because of Everton's poor form, but because of his appointment's wider context.

A fruitful six-year spell in charge of arch-rivals Liverpool came to an end over a decade ago, but questionable comments about the Toffees being a 'small club' are unlikely to be forgotten.

That is part of the reason he evolved into a Newcastle fan-favourite during his time on Tyneside, and he was allegedly offered the chance to return to the club several weeks ago.

However, Benitez turned it down with his Everton project barely underway, although things have certainly taken a turn for the worst since.

The Toffees will not have to wait long to have another crack at returning to winning ways with a date set for Wednesday evening, but ominously, it is with a rampant Liverpool side.

Seeing Benitez in their local rival's dugout will be curious for Reds fans, and the 61-year-old is sure to feel the wrath of his own supporters once again if they fail to put on a show.