Carragher calls on Everton fans to 'wake up' amid Kenwright criticism

Rainbow Laces: Molly McCann on her UFC pride, being an LGBTQ+ role model, and her beloved Everton
Sky Sports 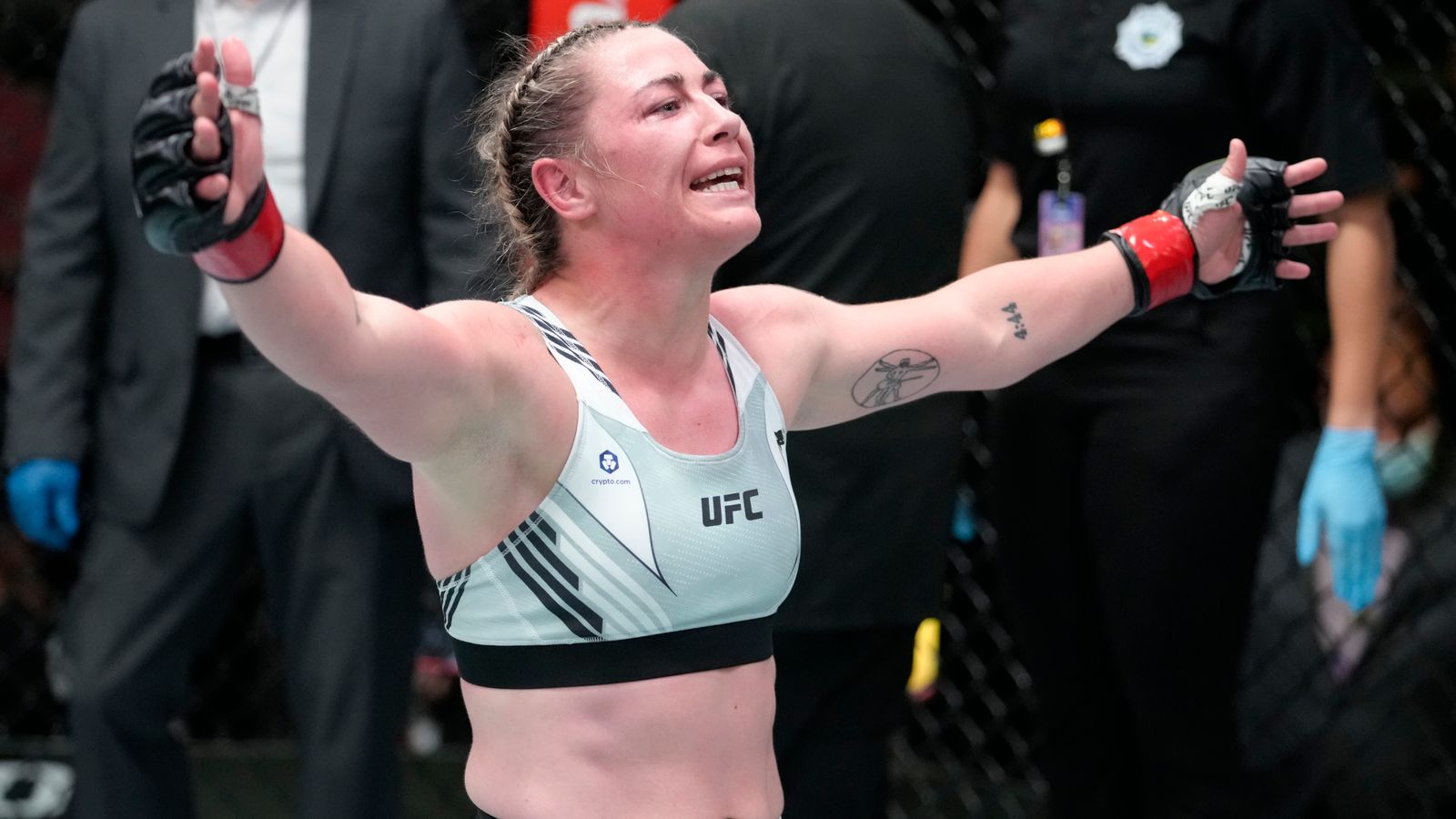 Molly McCann has set her sights on competing for a world title in 2023 - but the UFC fighter has an additional quest outside the octagon.

The 31-year-old from Liverpool recorded an impressive victory over flyweight opponent Ji Yeon Kim at UFC Fight Night 191 in Las Vegas in September, earning herself a new contract in the process.

It was a huge occasion for Merseyside as well, with McCann's fellow Liverpudlian Paddy Pimblett registering a spectacular first-round knockout of Luigi Vendramini.

McCann is currently in pre-camp back home in her native city, as she plans for a probable return to action in March.

Image: McCann reacts after the conclusion of her flyweight fight against South Korea's Ji Yeon Kim on UFC Fight Night in Las Vegas in September

She's also taking time out to show support for Rainbow Laces, which is returning for its annual activation this weekend and running through to December 12. McCann is one of a new intake of Stonewall Sport Champions, serving as an ambassador for the LGBTQ+ inclusion in sport campaign.

As a huge Everton fan and a former player, she is acutely aware of the importance of the message in professional men's football in particular.

"Being an ex-footballer myself, I was always aware of Rainbow Laces," she tells Sky Sports.

"When I was fighting and travelling the world, I thought, 'how can I show my support in what I'm doing?' So I put the laces in my boxing gloves, and in my boots if I'm ever wrestling or anything like that."

This year's campaign theme is 'Lace Up and Speak Up' and McCann says being a vocal ally is something that comes naturally to her as an out gay woman in combat sports.

UFC has been proactive on inclusion for several years through its 'We Are All Fighters' initiative, but challenges remain with regards to homophobia and stigma, particularly on the men's side of the sport.

"My mum always said to me 'pick your cause' and who you're going to fight for, and I always thought I'll stand up for my city and where I'm from and the people there, and I'll also stand up for my community, the LGBTQ+ community.

"I'm going to make it my mission to see if I can help a male fighter come out in my time, whilst fighting or post fighting. It's unfair that someone shouldn't be able to be themselves out of fear of being persecuted or being trolled constantly."

'My sport allowed me to come out'

McCann is impressed by the forward-thinking attitude of UFC on all matters of equality, and recent developments in men's sport outside of MMA have also given her encouragement.

In late October, Adelaide United left-back Josh Cavallo shared his story of being a gay man in football, making him the only out player currently active in a men's top-tier league anywhere in the world.

Speaking to Sky Sports in October, Josh Cavallo said he had been 'overwhelmed' by the positive response he received after coming out publicly as gay

That followed on from two trailblazers in the US 'big leagues' - Carl Nassib of the Las Vegas Raiders in NFL, and 19-year-old contracted NHL prospect Luke Prokop.

McCann is confident that the trio's visibility will have a significant impact for any sports fan who is struggling with their sexuality and who looks up to them as role models.

"I expect all those people will always try to answer a DM," adds McCann.

"When you speak to someone who's been through those same feelings, they'll help you out or give you a bit of advice."

In May, McCann published a book titled 'Be True To You', illustrated by Sean Webster, that introduces the theme of coming out to children via a short story.

"The idea of my book was just to say that, I was a late bloomer - I wasn't fully OK with who I was and open about it until I was 25," she explains.

"For me, I was running away from who I was for a long time. It was my sport, my coaches and my gym that allowed me to come out.

"Sport should always be that safe space for someone, whether it's leaving an abusive home and family life, or whether you're escaping the reality of who you are."

I was just going in there to leave no question in the judges' minds... I came through it all.

McCann says she is honoured to have been asked to be a Sport Champion by the charity Stonewall, and feels elite athletes have a responsibility to use their platform to help others.

Olympic gold medallist Tom Daley, who came out via a YouTube video at the age of just 19, is one of her sporting icons. She admires how he has handled his authenticity while in the public eye.

"Can you imagine how nerve-racking that would be and how horrible it must be to have read some of the comments he gets?

"His story shows resilience and how to overcome adversity, with all this being thrust at him from such a young age. He's absolutely rolled with it.

"He's in GQ, and Gay Times, and he's married with a child - I think he's a blueprint for what a gay footballer would strive for."

Targets and the Toffees

As for McCann's UFC ambitions, she is now determined to build on that triumph in Vegas which was an immensely satisfying but gruelling conquest, both mentally and physically.

Image: McCann is hoping to be back in the octagon in March

"Everyone was aware that if I lost, that was kind of me done. If I won, that was me back in the mix and not too many fights off a world title. Everything was on the line," she says.

"I was so injured going into the fight. I had a torn ACL, a torn PCL, a broken knuckle - but I was just going in there to leave no question in the judges' minds.

"I tried to personify a Scouser! All the Americans were saying, 'what do you mean?' I said, 'just watch the performance and you'll get it'.

"I came through it all and when I won, I knew I was going to get the new contract. Now I hope to get a good two or three fights out before Christmas 2022, and then fight for the world title in 2023."

McCann is seeing out 2021 by getting to spend more time following her beloved Toffees home and away, although with Rafael Benitez's injury-plagued side currently on a six-game winless run in the Premier League, it's been a tough few weeks on the terraces.

Those recent results were discussed at length last weekend with fellow fans when she took part in an Everton in the Community fundraiser.

"We did a sleepout last weekend, overnight at Goodison Park, to replicate what it's like if you had to sleep rough. EITC raised about £34,000 for the homeless people of the city. I said while Everton may let you down sometimes, Molly won't!"

It's Brentford away on Sunday, live on Sky Sports, followed by the Merseyside derby against Liverpool, which will be Everton's dedicated Rainbow Laces fixture. She's expecting a nervy Wednesday evening but is keeping faith with Benitez's philosophy and is tentatively predicting a 1-0 win.

Whatever the result, her support for her team is unequivocal - just like her commitment to the LGBTQ+ community as one of the city's favourite sporting champions.

Sky Sports is a member of TeamPride which supports Stonewall's Rainbow Laces campaign, back for its annual activation from November 25 to December 12. Your story of being LGBTQ+ or an ally could help to make sport everyone's game - please contact us here to discuss further.