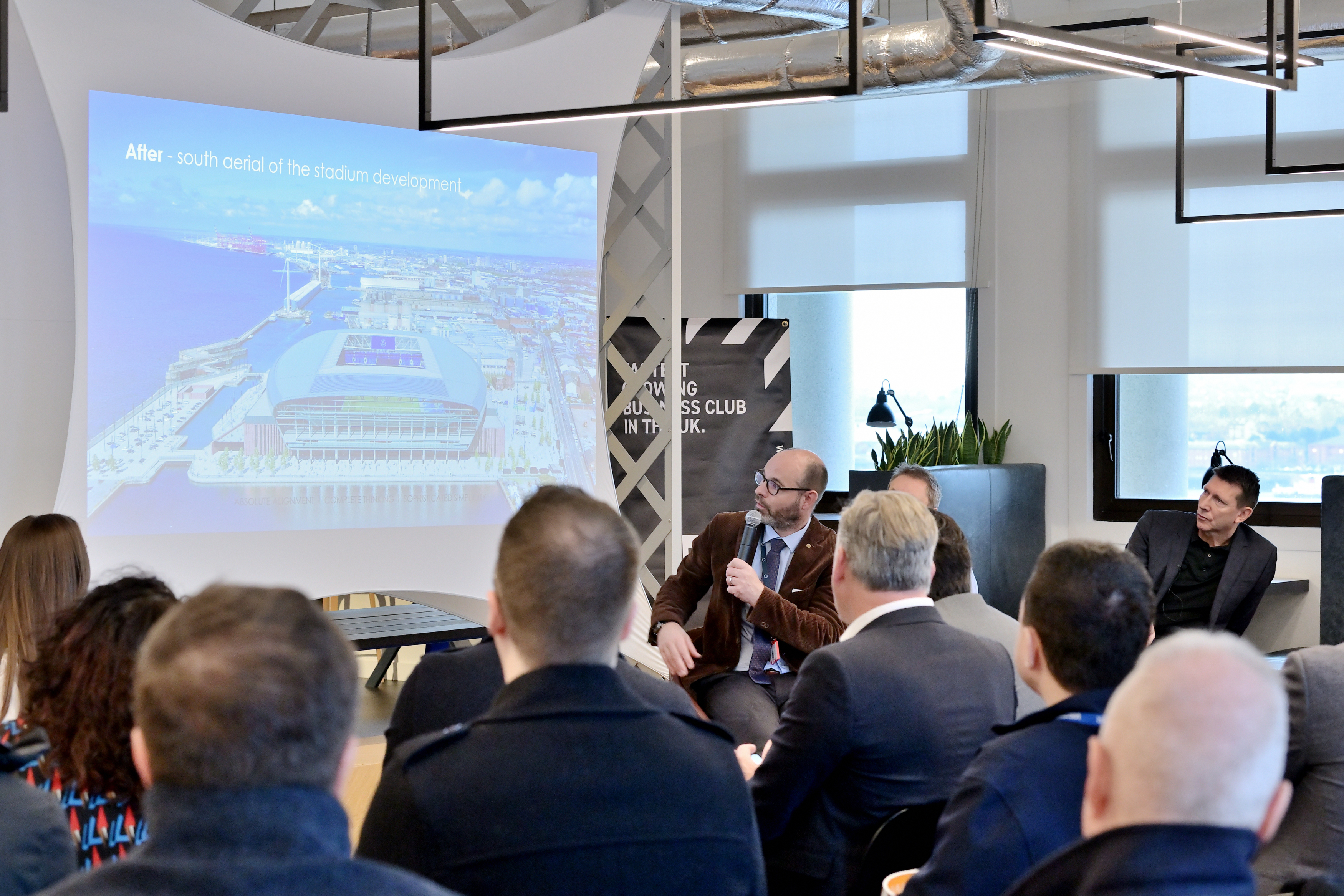 Business leaders have been given an update on the progress of Everton’s new stadium.

Around 40 members of the Downtown in Business networking organisation met with representatives from the Club and construction partner Laing O’Rourke at the Club's HQ in the Royal Liver Building, where they were given an overview of work on the waterfront development.

Attendees were given an insight in to various elements of the major construction project, including sustainability, inclusivity, environmental concerns and the social value generated by the build.

And with the creation of local jobs - both during the stadium build and the subsequent wider regeneration of the area - high on the agenda, the business sector has thrown their collective weight behind Everton’s ambitious plans.

Frank McKenna, Chief Executive of Downtown in Business, said: “In this city everyone has their football hat on, first and foremost, but what we have been keen to explain to the wider business community is that this is genuinely a regeneration project that will benefit the whole of the city.

“It doesn’t matter who your allegiance is with; this gives the north of Liverpool an opportunity that it has needed, for generations, of regenerating an area that is one of the most deprived in Europe.

“For us it’s been about getting that narrative the right way around, because there are lots of businesses in the city who are maybe headquartered in Manchester or London and who wouldn’t necessarily think the development of a new stadium was a big deal.

“Yes, this is a football stadium first - and one the city will be proud of - but also look at the opportunities that brings around that area of Liverpool.”

The business leaders heard that the infill process at Bramley-Moore Dock is on track to be completed early next year, when the enabling works can be completed and work can finally begin on the above ground build of the state-of-the-art arena.

Chong explained that Everton undertook a wide-ranging consultation process, and that replicating the atmosphere generated at Goodison Park was key.

The Club has been working with construction partners and engineers on how to enhance the acoustics of a new stadium and provided an example of the impact of tighter seating on atmosphere.

In her role as Stadium Development and Project Manager, Craig explained that all existing materials generated by the building, including brickwork from demolished warehouses and ground materials as part of the remediation works, will be re-used across the site to enhance the sustainability of the development.

The Club also confirmed that the site’s key heritage assets, including cobbles, capstans, mooring posts and railway lines have been removed, preserved and will be re-instated as part of the finished site.

Kenyon, Everton’s Director of Communications, Revenue and International Growth, added that the social value of the build will be felt across the region, through new businesses springing up, an increase in tourism and the creation of thousands of jobs.

Gareth Jacques, Project Director for Laing O’Rourke, who was joined by Technical and Design Leader John Edwards, offered a stunning CGI time-lapse of the site, showing the build-process of the largest private-sector development in northern England, during the country’s post-pandemic recovery.

McKenna added: “As an Evertonian we have been talking about a new stadium for 20 or 30 years now, so it’s always important hat when progress is being made, we remind people that this is not a pie in the sky thing.

“Progress, as we’ve seen this morning, is visually here for all to see and people will naturally be thinking ‘how can this affect me?’

“Throughout the whole journey, it will be important for us all to come back and talk about where we are up to, and as it progresses, those people in the audience ask how they can get involved, not only in the stadium, but also the Goodison Legacy project, which will help transform Walton.

“It’s a shame that because of all that’s been going on, we could only get around 40 people into the Royal Liver Building today, but you can imagine how many wanted to come and that’s why it’s important to keep holding these events.

“People who were here will be out and about, talking about the project and the fantastic visuals that’ve been able to see - and that adds a buzz and an excitement into the city regeneration conversation.”