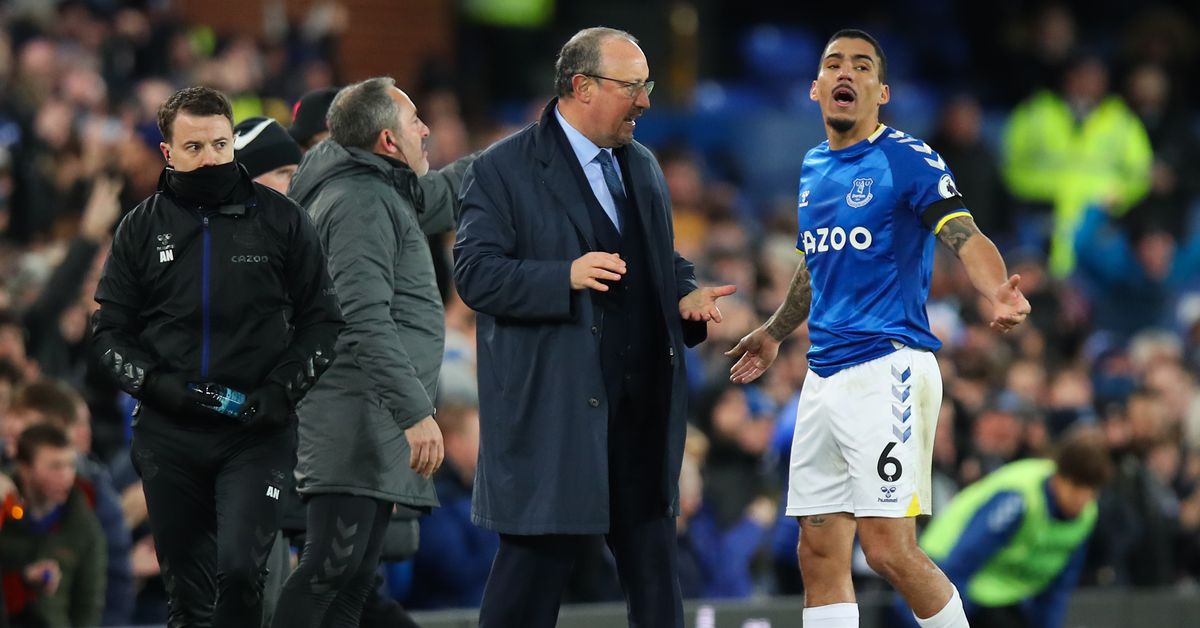 Many analysts, including our own TacticallyEv expected that Toffees boss Rafa Benitez would look to match Liverpool’s 4-3-3 formation on Wednesday night, with the intent to compete in the middle of the park and to congest space in front of the back 4. Fabian Delph had impressed, looking a natural when deployed in a deep-lying midfield role, but missed out against Brentford at the weekend with Aboulaye Doucoure’s return from injury layoff to first team action. Most assumed he was being rested for the derby matchup, but sadly this did not prove to be the case. Instead, the Blues adopted a 4-4-2 with a forward tandem of Salomon Rondon and Richarlison.

Almost immediately this approach looked to be inviting disaster, as the Reds used the full width of the pitch in order to stretch Everton, who were obviously concerned with the threat posed by opposition full backs Andy Robertson and - in particular - Trent Alexander-Arnold. This ensured that wingers Demarai Gray and Andros Townsend would be fully occupied helping out in wide areas, leaving Doucoure and Allan to cope with Liverpool’s midfield 3. Both are certainly the best midfielders that Benitez has available, but the Frenchman is only recently returned from a spell out with a stress fracture to his foot, whereas the Brazilian - for all his qualities - is not the quickest.

The duo tried hard and ran themselves into the ground, but Jordan Henderson, Tiago and Fabinho had all the time and space in the world to get on the ball and dictate proceedings. Including the play of substitutes James Milner and Alex Oxlade-Chamberlain, only 8.1% of passes by Jurgen Klopp’s midfield were made under pressure. By comparison, 27.4% of the passes attempted by Everton central midfielders were hurried. Mikel Arteta’s 4-4-1-1 against the Reds had similarly backfired and it appears Benitez learned nothing from that.

In combination with the Blues backline sitting fairly deep, worried as they were by the pace of the opposition front 3, a half-hearted and uncoordinated press time and again opened up big gaps between the lines, which the visitors were able to easily exploit. That Benitez didn’t anticipate this when constructing his tactical approach is concerning; that he didn’t adjust until the 72nd minutes, when Delph was brought on for Townsend, is even more worrying.

Is Calvert-Lewin the Answer?

Benitez, with limited room to manoeuvre in the summer transfer window, prioritized wingers in order to service striker Dominic Calvert-Lewin, one of the division’s best aerial attackers. He also fought hard to bring in Rondon as a backup option. Of course, Calvert-Lewin has been sidelined now for most of the season, with an expected return before the Boxing Day visit to Burnley looking optimistic. If this is the case, then the England forward would have missed 15 of 18 league matches by then, which has to have had a major disruptive effect on the manager’s plans.

That, in his stead, Rondon has played a lot more than anticipated, clocking in with over 600 league minutes, is obviously undesirable. The Venezuelan veteran has so far drawn a blank in front of goal, managing no shots Wednesday night, though his general play was to a reasonable standard.

Facing their local rivals at Goodison Park, Everton paired Rondon with Richarlison in a conventional front pair, with Gray and Townsend stationed out wide and presumably instructed to get into good crossing positions. However, Liverpool dominated possession from the kick-off, pushing Everton back into a defensive shell and opportunities for either winger, or full backs Seamus Coleman and Lucas Digne, to get forward were few and far between.

By the final whistle the Blues had only managed to complete one cross into the visitor’s box. In terms of aerial duels, most of which would have been as a result of direct high balls, rather than the few crosses the Toffees attempted, Richarlison was completely ineffective, whereas Rondon won his battles, albeit whilst dropping deep and far from threatening areas of the pitch.

Neither of the two striking options available to Benitez are suitable replacements for Calvert-Lewin, either due to a lack of physical size (Richarlison) or mobility (Rondon). The Yorkshireman, even when he returns may not be up to full speed until well into the New Year and the Spanish tactician must use all his experience and knowledge in order to find a way for his team to win without his star striker’s services.

Where Does this all Lead?

If there was any remaining doubt, the problems besetting Benitez were laid out starkly midweek, under the lights at Goodison Park. The promising early season form and attitude shown by his charges has long since vanished and the Toffees are currently playing as poorly as any team in the Premier League and sliding down the table. So far, the manager has the vocal backing of majority shareholder and de facto owner Farhad Moshiri, even as discontent among fans largely antipathetic to his appointment is steadily growing. The veteran boss is an experienced football man, who will always back himself and trust his own instincts and methods, but he wouldn’t be human if he wasn’t feeling the mounting pressure.

The Spaniard has continued to set up Everton to largely play without the ball, as a mid-block counterattacking team, plugging gaps and tweaking formation as required to compensate for the numerous players that have been unavailable for selection through injury. Obviously, results have declined alarmingly and it appears that Benitez’ decision-making is becoming more suspect and less sure-footed. Much of the team’s offensive play against Brentford at the weekend was aimless and in the derby match, switching to a two-man midfield and going with two upfront seemed out of character for a man known for his pragmatic approach, particularly when facing opponents fielding one of the best attacks in world football. The Everton manager is not a gambler, but someone who talks often of balance, so seeing him throw caution to the wind was a bit unsettling.

However one looks at it, a run of eight league games without a win will have any manager on the brink of a precipice as regards job security and Benitez desperately needs to reverse the direction the team is heading in. To some extent, the ongoing injury problems at the club have allowed him some leeway, but going into the Arsenal match on Monday, the squad will be without only Calvert-Lewin since central defender Yerry Mina has resumed training as of yesterday. If the Blues cannot get results when only missing one or two important players, what does that say about the state of the squad, or Benitez’ ability to manage it? Moshiri will be at Goodison for the next match and will want to see improved performance levels from the team and the man he effectively hand-picked to manage it.

Of course, responsibility for the parlous condition of Everton Football Club, both in terms of the composition of its playing staff and the financial restrictions currently limiting its ability to operate in the transfer market lays far beyond Benitez, in scope as well as time. Moshiri and those entrusted by him with day-to-day running of the club are far more complicit, but in football, the buck typically stops at the manager’s door.