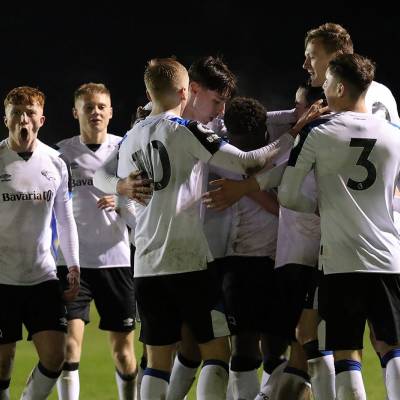 Derby County’s Under-23s continued their impressive run of form on Friday night as they came from behind to defeat Chelsea 3-1 in Premier League 2 - Division 1.

All three of the Rams’ goals came in the second half at Loughborough University Stadium, after they trailed at the break to Jude Soonsup-Bell’s fine early strike, as they extended their unbeaten run to five matches.

Striker Bartosz Cybulski netted twice while Osazee Aghatise also got his name on the scoresheet as Pat Lyons’s side picked up maximum points to climb off the bottom of the league table.

Derby entered the contest unbeaten in four matches in all competitions and had picked up seven points from a possible nine in their previous three league fixtures, which included a thrilling 5-3 success at Arsenal seven days ago.

The Rams’ line-up included midfield duo Louie Watson and Louie Sibley as the duo sought to get more match minutes under their belts after being on the fringes of Wayne Rooney’s starting line-up in the first-team in recent weeks.

Derby started game confidently and went close after 11 minutes as midfielder Isaac Hutchinson hit the crossbar with a firm strike from the edge of the penalty area.

A matter of seconds later down the other end, and with the woodwork still shaking, England Under-19 international Soonsup-Bell put the visitors ahead with a superb right-footed effort into the top corner from 18 yards out which left goalkeeper Harrison Foulkes grasping at thin air.

Dion Rankine put a good opportunity over the bar for Chelsea from a narrow angle just before the midway point of the half, while Sibley forced a save out of former Burton Albion goalkeeper Teddy Sharman-Lowe from distance as the Rams looked to get back onto level terms.

Derby had a chance to equalise in the final minute of the half with Hutchinson delivering a superb ball into the box from the right-hand side towards the unmarked Cybulski six yards out, but the striker headed wide.

Lyons’ side started the second half well and Sibley once again got a shot away from around 25 yards out which Sharman-Lowe got his hands to.

Derby continued to probe and ask questions of last season’s Premier League 2 - Division 1 runner’s up and their persistence was eventually rewarded as a moment of quality, and a bolt from the blue, saw Derby haul themselves back onto level terms just before the hour mark.

A loose ball fell into kindly to Cybulski inside the Chelsea box and the frontman hammered a right-footed effort which flashed beyond Sharman-Lowe at the near post before he could move.

The Rams weren’t done there and with their tails up they immediately needed a second to completely turn the game around. Watson went on a fine run from midfield and Aghatise kept is cool to latch onto his through-ball and slot the ball into the bottom corner.

A third followed with just over ten minutes remaining as Derby continued to offer a threat going forward and Cybulski once again displayed his quality in front of goal. Skipper Eiran Cashin advanced forward from defence and slipped the ball to the striker inside the box and his low strike found the net for his fourth goal of the campaign.

Derby saw the latter stages out well to record another impressive and deserved victory as they Lyons’ side continued to go from strength to strength.