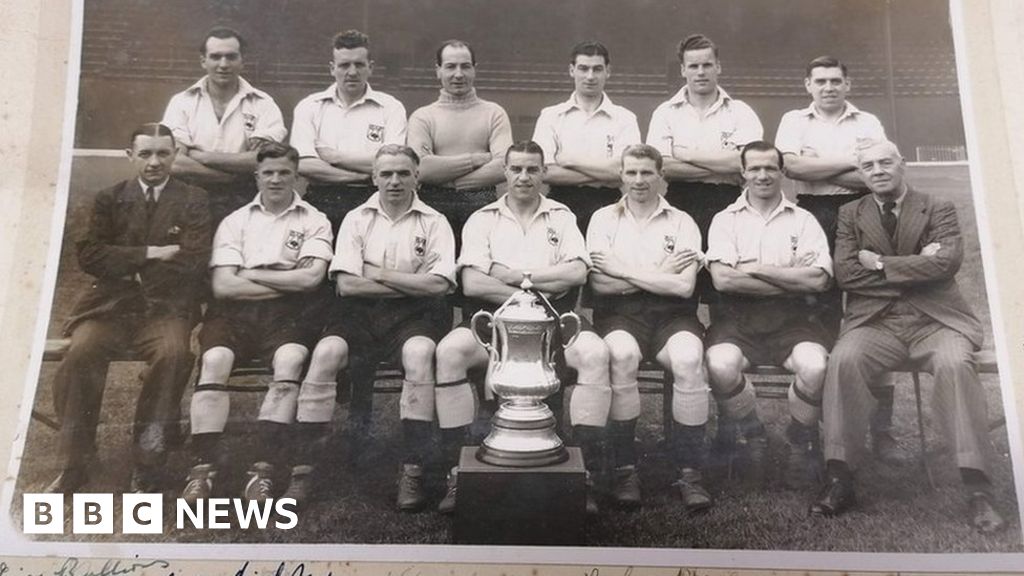 An archive of Derby County memorabilia, featuring a signed photo of the 1946 FA Cup-winning team, has sold for more than £3,000 at auction.

The collection belonged to Gilbert Dickenson, director of the club from the 1930s to the 1950s, and were found after the death of his son Kenneth.

It included programmes, player contracts and a photo album of a 1934 team trip to Nazi Germany.

The lot was sold at Hansons Auctioneers in Etwall, Derbyshire.

The photo album featuring more than 50 photographs from the Germany trip sold for £130 and included a picture of Derby County players giving the Nazi salute.

An order from Hitler's officials to give the salute had been backed by British diplomats and only goalkeeper Jack Kirby refused.

It was found along with the rest of the archive when relatives cleared Kenneth Dickenson's house in Littleover following his death in January.

Fixture lists, a 1948-49 handbook, and two Waterford vs Derby County dinner menus from 1950 were sold

A member of the family, a 43-year-old factory worker from Derby, said: "The house hadn't been touched for years and it'd been empty for a long time. Nothing had been thrown away. There was stuff everywhere.

"We put everything that we thought may be of value to one side. But we're not big football fans and didn't immediately realise the significance of some of the Derby County memorabilia, such as the signed football photo from 1946."

Auctioneer Charles Hanson, who visited the house, said: "Given the fact that the club's current financial situation forced them into administration in September 2021, I found it fascinating to read about the difficulties they were facing in the 1940s.

"Another letter dated September 4, 1942 mentions salary arrears due to George Jobey, who managed the Rams from 1925 to 1941.

"Derby may be down at present but passion worldwide for Derby County and it's history in archive is a strong as ever."