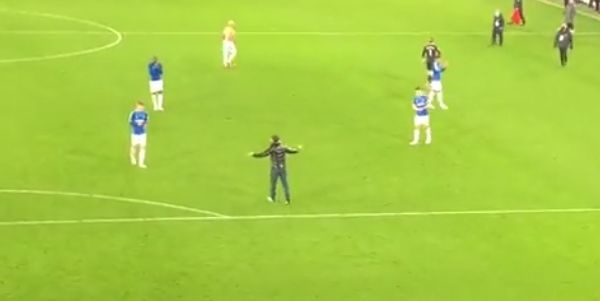 Liverpool humbled Everton as they put four goals past the Blues on what must have been a torturous evening for our local rivals.

One supporter got onto the field of play after the full-time whistle and confronted some of Rafa Benitez’s team in anger at the performance they had just displayed.

There must be comments on the stewards for the fan to gain access to the pitch and be afforded so much time to verbally assault Anthony Gordon, Seamus Coleman and Abdoulaye Doucoure.

READ MORE: (Video) “Catch him if you can” – Peter Drury’s commentary of Mo Salah’s goal after he outpaced Seamus Coleman and Lucas Digne

Although passionate, it never looked like it would turn violent and it’s fair enough that anyone in Goodison Park would be angry with their side’s performance.

There did appear to be a mixture of boos and applause from the fans still in their seats but the incredibly slow reaction of the stewards is worrying.

There’s been an increasing trend of people getting onto the pitch after the game and the stewards across the board need to start doing their job as it only takes one idiot to attack a player.

You can watch the video of the Everton supporter via @TAndersonsport:

Everton fan invades pitch and questions players after defeat to Liverpool. Another defeat with a lack of fight. #EVELIV pic.twitter.com/NhuLUgSBfw