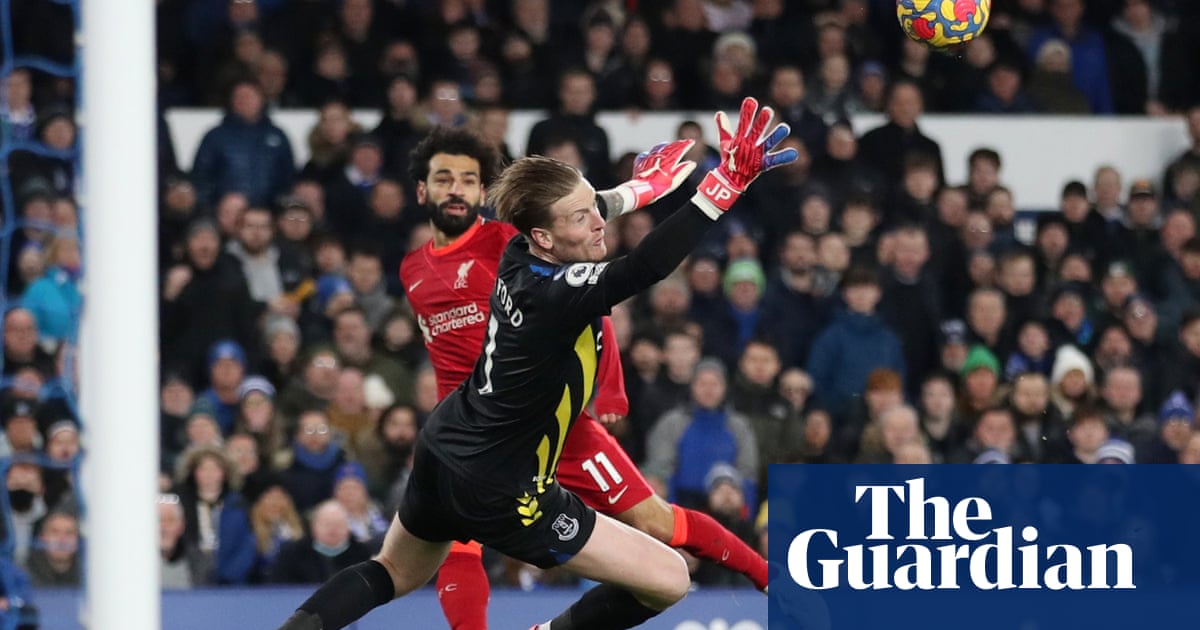 It was everything Everton had feared and Liverpool desired on their return to the stadium where the fault-lines first appeared in their title defence last season. Jürgen Klopp’s players followed his instructions to perfection, focusing on their superior football rather than revenge, and recorded a comprehensive derby victory to deepen Rafael Benítez’s troubles at Goodison Park.

Liverpool outclassed their local rivals and scored four superb goals through Jordan Henderson, Mohamed Salah, twice, and Diogo Jota. Demarai Gray offered Everton unexpected hope but they were a distant second best in every department. “Rafa’s at the wheel,” the Liverpool fans chanted in the closing stages, as Everton’s winless run extended to eight games.

Liverpool fans started chanting the name of their Champions League-winning former manager before kick-off – the first time Benítez’s name has been sung at Goodison since his appointment – as they prepared to revel in their local rivals’ misery. The 239th Merseyside derby was preceded by applause for the Liverpool great Ray Kennedy and Cliff Marshall, the first black player to play for Everton, who both died in recent days.

There was also applause and a standing ovation in the 12th minute for Ava White, the 12-year-old girl killed in Liverpool city centre last week. The optimism of the 2,902 away fans in the Bullens Road stand was unsurprisingly well-founded. Klopp’s team swept through the gaps in the Everton midfield and around an exposed home defence with ludicrous ease.

By the time Henderson swept the visitors into a deserved lead with nine minutes gone, it could have been Liverpool’s fourth of an embryonic game. Liverpool’s first clear chance arrived in the opening seconds after a communication mix-up between Seamus Coleman and Jordan Pickford presented Trent Alexander-Arnold with the first corner. Joël Matip was left completely unmarked by an Everton team that has struggled all season with Benítez’s zonal marking instructions but steered a free header wide of the far post.

Salah, of all people, squandered a better opportunity when Andros Townsend’s loose pass released Diogo Jota to the byline. Jota’s cross found the Premier League’s top scorer in front of goal but, opting for an awkward volley instead of a stooping header, Salah skied over. He forced a fine save from Pickford moments later with a first time shot from Sadio Mané’s centre as Liverpool continued to prosper from overloads down their left.

Eventually, inevitably, Liverpool found a finishing touch, and in some style too. For all the visitors’ evident superiority they were regularly assisted by careless distribution from their hosts. The opener arrived after Demarai Gray broke clear and threaded a pass between Everton’s two-man attack of Richarlison and Salomón Rondón and straight to Andy Robertson. The Liverpool full-back pounced instantly, exchanging passes with Mané and pulling a low cross back from the left towards the incoming Henderson. The captain opened up his body and swept a delightful precision effort around Pickford’s right hand and just inside the post.

His chest-thumping celebrations in front of the Gwladys Street End prompted one idiot to throw a plastic bottle towards the Liverpool throng. It missed. Liverpool’s second stemmed from another lightning attack after Everton lost possession, the culprit this time Ben Godfrey while sprinting into central midfield.

Henderson threaded a superb ball around Lucas Digne and into the path of Salah, who advanced on Pickford’s goal from the right and dinked an audacious chip over the England goalkeeper from a tight angle. Everton’s worst derby fears were being realised, although they were given glimmers of hope on the few occasions Gray or Richarlison found space in the final third. Townsend and Gray were booked for diving, while Allan, Digne and Thiago all received harsh yellow cards from referee Paul Tierney.

Evertonians’ understandable anger at the club’s deep-rooted problems was summed up by the banner that appeared in the Gwladys Street end as Liverpool dominated. “Nil Satis Nisi Optimum”, it read, the club’s Latin motto: “nothing but the best is good enough”.

Yet Goodison suddenly had hope, and something to get behind, when Gray dragged Benítez’s team back into the contest before half-time. Richarlison created the goal with a neat turn from Allan’s pass and piercing ball through the heart of the Liverpool defence. Gray raced through and squeezed his finish low under the advancing Alisson.

Everton succeeded in closing off the gaps that Liverpool had exploited in the opening stages and were far better organised before and after Gray’s strike. But they undermined their prospects of a recovery with a catalogue of errors that gifted Liverpool their third. Townsend first played a poor corner to the front post where Robertson headed clear. Gray then put Coleman under pressure with a high, awkward pass back that the Everton captain mis-controlled into the path of Salah.

There was still plenty to do for the Egypt international as he sprinted from the centre circle yet he held off Coleman all the way before rolling a cool, clinical finish beyond the advancing Pickford. When Jota fired the fourth into the roof of the Everton net, having collected Robertson’s ball into the box and turned Allan with ease, it was the cue for many home fans to head for the exits and Benítez’s name to be chanted again. From the Liverpool section, of course.