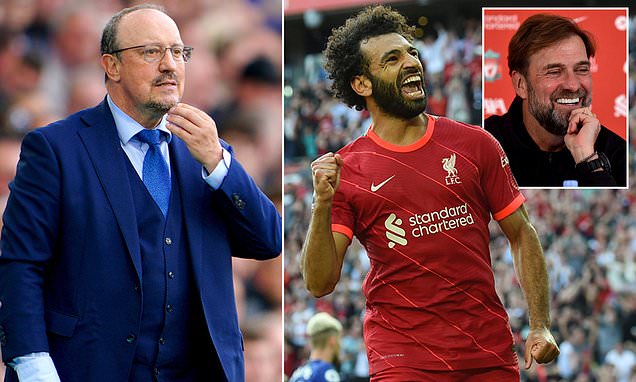 Liverpool and Everton clash for the 239th time tonight, with Toffees boss Rafa Benitez achieving a feat not seen since 1894 when he takes to the dugout at Goodison Park.

The Spaniard, 61, is the first manager in 127 years to take charge of both Merseyside clubs in a derby. Yet Benitez will have little time to bask in that achievement in frosty conditions this evening.

The Toffees have just one win from their last nine league games, with Sunday's defeat at Brentford triggering a vitriolic response from the travelling fans in west London.

A clash with arch rivals Liverpool, then, appears to have come at the worst possible time. Jurgen Klopp's men are in inspired form, putting four past Southampton over the weekend to close the gap on league leaders Chelsea to two points.


Having been involved in 14 Merseyside derbies, Benitez is acutely aware of the significance of the rivalry to both halves of the city, and he will be relatively buoyed by his record in this contest.

The Spaniard has won eight, drawn three and lost three of those games in all competitions during his time at Anfield, although his team - led by Steven Gerrard - were largely expected to see off David Moyes' overachievers during that spell.

All three defeats came at Goodison Park, including a chastening 3-0 in 2006 where the Everton masses drove their side onto victory with Tim Cahill and Andy Johnson working in tandem to run the visitors ragged.

Benitez, then, will know that a special result is not fanciful and his home record will also be a source of confidence. The 61-year-old is undefeated in the Merseyside derby at home, albeit those games were played at Anfield.

The former Reds manager meets his old side with his third different club, having taken charge of Chelsea and Newcastle since his 2010 departure from Merseyside.

The 61-year-old, however, has a poor record against the Reds since leaving his post, failing to win his last six matches against Liverpool. His last victory over the red half of Merseyside came in 2002 as Valencia manager.

His most recent clash with Liverpool resulted in a 3-2 defeat at St James' Park in May 2019, with an 86th minute Divock Origi strike snatching all three points for Jurgen Klopp's side.

'With Newcastle (and) Chelsea, I've played against Liverpool,' Benitez said ahead of tonight's game. 'This time it is different. It will be an opportunity for us to change things.'

Everton will, however, take inspiration from last February's 2-0 victory at Anfield - their first win over their arch-rivals in 11 years, having failed to win their previous 23 derby clashes before their last meeting.

Much has changed in the following 10 months, though. The Toffees moved level on points with their Merseyside rivals in the wake of their seismic victory - now, 13 points and 11 league positions separate these foes.

'As a manager you want to win and do well,' Benitez added. 'It's a challenge for me and I can understand the frustration from fans.

However, Benitez has failed to register a win over his former club since 2002 with Valencia

'It's been some years we are not improving. I think the fans are intelligent and know we need them.

'You can complain when players are not playing well or tactics are not working but at the same time they cannot complain about the effort. It's a derby, I'm sure they will be behind the team.

'It's a massive game for us, the derby is always an opportunity to put things right. A derby is always special in every country but I live in the city so the passion is massive and really important for everyone.

'That's why I want to win and do well because for us as a club, it's important to bring back the confidence and use an opportunity to change things for the rest of the season.'

There would be no better way to drag Everton out of this alarming slump than to get one over their closest rivals tonight. Benitez will hope he can conjure up some more Merseyside magic, against all odds.