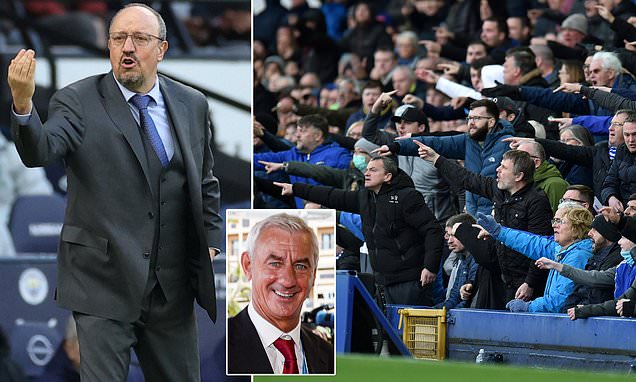 Everton's supporters will crank up the pressure on Rafael Benitez by another notch if they lose Wednesday's Merseyside derby, according to Ian Rush.

The Toffees head into the first derby of the season against Liverpool on a torrid run of form, with Sunday's defeat at Brentford extending their winless run to seven matches.

Toffees fans showed V signs to their players and shouted abuse at them following their reverse at the Brentford Community Stadium, but Benitez has since urged the club's angry supporters to back their out-of-form team in the derby.

Rafa Benitez (right) will 'feel a bit of heat' from Everton's fans if he loses the Merseyside derby, according to Ian Rush (left)

But speaking to Gambling.com ahead of Wednesday's Premier League clash at Goodison Park, Reds legend Rush insists Benitez is aware of the 'ruthless' industry he is in, especially after the Steve Bruce and Ole Gunnar Solskjaer's sackings at Newcastle and Manchester United this season.


However, the 60-year-old former Wales forward has backed the under-fire Spaniard to turn the Toffees' fortunes around, regardless of the result against Jurgen Klopp's men.

'If Liverpool win and win well, Rafa will no doubt feel a bit of heat from the Toffees support and the press, but that's football and he'll be ready for that,' Rush said.

'We've seen it recently with Steve Bruce and Ole Gunnar Solskjaer losing their jobs – it's a ruthless industry – but Rafa is fully aware of what he's got himself in to.

'There's already pressure because they haven't won in seven league games and that run will be even harder to stomach if they lose to their local rivals on Wednesday.

'But I think people should be looking at the long term rather than the short term and I have no doubts Rafa will turn things around at Everton whatever happens in the derby.

'The Liverpool game is a big chance to make an impression, but if they don't get a result there are other big games coming up and they'll surely start winning.'

Former Liverpool manager Benitez, 61, has won just four of his 13 league games in charge of Everton since making a return to the Premier League in the summer as Carlo Ancelotti's successor, having left Dalian Professional in China earlier in the year.

And while Rush admits he was left 'surprised' by Benitez's 'brave' decision to join Everton given his connection to the other half of Merseyside - where he won the Champions League - he urged the Spaniard to be given time in his current post by the hierarchy.

'When Rafa went to Everton I have to say I was a bit surprised, but I think he just wanted to get back into football and the Everton job came up,' Rush added.

'He lives in the area, so it made a lot of sense in some ways, but it was a brave decision by him.

'He knows the people of Liverpool, he loves the city and is very connected with the locals and I think that's part of what attracted him to Everton where he's desperate to succeed and give their supporters something to shout about.

'He has confidence in his own ability and so do I, it's a good appointment and I think it will work out given time.

'I know Rafa personally and I genuinely want him to succeed at Everton, but I just hope things only start to go his way after the Liverpool game because I want them to get all three points.

'It's not an easy job but he's prepared to get Everton back where they belong and I wish him the best of luck – after the Liverpool game of course.'

But he urged the Everton hierarchy to give him time (pictured: chairman Bill Kenwright (left) and owner Farhad Moshiri (right))