Forsyth Its A Tough One To Take
DCFC Official Site 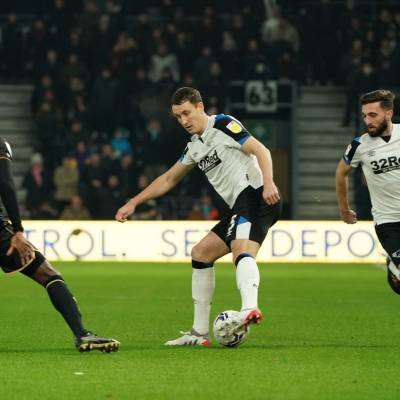 Defender Craig Forsyth was disappointed to concede late on as Derby County were beaten 2-1 at home to Queens Park Rangers.

Andre Gray struck in the 90th minute, firing emphatically into the top corner, to win the game for the R’s as they turned the game on its head in the second half.

Tom Lawrence had given Derby the lead on 10 minutes as he raced on to a through ball from midfielder Graeme Shinnie and struck into the top corner to give Derby the perfect start.

But, a strike from Chris Willock drew Mark Warburton’s side level, whilst Gray’s late goal ensured the points returned to the capital as Derby’s three-game unbeaten run came to an end.

It’s only Derby’s second home defeat of the campaign and Forsyth, the club’s longest serving player, was frustrated to lose so late on.

“It’s a very tough one to take, especially at home from a winning position,” he told RamsTV. “It’s two sloppy goals from our part and we’ve come out on the wrong end of it. It’s disappointing.

“Second half was too open for our liking and in the last 10 minutes we made the chances to go for three points which is what we need but unfortunately we’ve come out on the wrong end of it tonight.

“We take responsibility for that because we still have a job to do to as players to see the game out. We didn’t do that tonight and we got punished for it.”

A positive for the Rams this evening was the opening goal of the night, which was a goal from the training ground.

“It’s something which we’ve worked on in pressing higher up the pitch and get after them,” Forsyth said. “It worked, one pass and Tom was through and it was a great finish.”

The defeat is only Derby’s sixth defeat of the campaign and has halted their three-game unbeaten run.

That had included a victory over high-flying AFC Bournemouth last weekend, whilst a midweek draw against league leaders Fulham had given the Rams momentum.

The Rams now sit 19 points outside the relegation places after this weekend’s round of fixtures and Forsyth knows his side need to continue to fight until the end to try and get out of it.

“I think we have showed throughout the season that we can hold our own against anybody in this division,” he commented.

“We have picked up two good results out of the last three games so it’s all about catching those teams and eating into those points.

“We’ve got to go for three points now and try to catch them.”