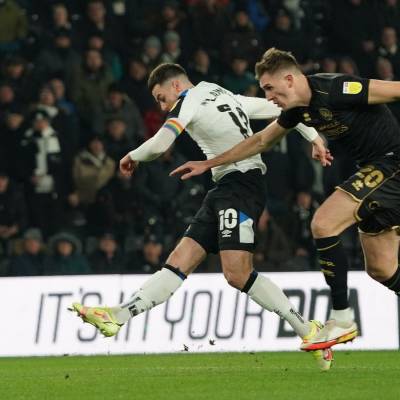 A late Andre Gray goal saw Derby County suffer only their second home defeat of the season as they were beaten 2-1 by Queens Park Rangers at Pride Park Stadium.

The Rams started the game well and took the lead on 10 minutes through an emphatic effort from Tom Lawrence who netted his 50th career goal and his fifth of the campaign.

But, two second half goals turned the game on its head as Derby fell to defeat. Chris Willock scored five minutes after half time, whilst in the final minute of normal time, Andre Gray found the top corner from 12 yards to win the game for the visitors.

Manager Wayne Rooney made one change as Ravel Morrison replaced Festy Ebosele who dropped to the substitutes bench.

And it was the Rams who came out of the blocks flying as they went close in the opening 20 seconds of the game.

Nathan Byrne’s pace got the better of Lee Wallace on the right. He evaded a challenge from the defender, picked himself up and crossed across the 18-yard box.

Graeme Shinnie picked up the ball and took aim from 20 yards but his effort flew past Seny Dieng’s far post.

Derby kept up the momentum and were rewarded with the opening goal of the game on 10 minutes as Lawrence fired home his fifth of the campaign.

Max Bird intercepted a pass in midfield and found his partner Shinnie. The Scottish midfielder threaded an excellently weighted through ball to the onrushing Lawrence who took the ball in his path and finished emphatically to put the Rams ahead.

The visitors hadn’t threatened the Rams’ goal, but Derby were almost masters of their own downfall on 14 minutes as a corner was flicked on at the near post by Lawrence and Curtis Davies was forced to head off the line.

Whilst the chances dried up somewhat, Derby continued to apply the pressure and press their opponents as they searched for their second of the evening.

Queens Park Rangers rarely threatened, and the closest they came to scoring was just over five minutes before the half time interval as Charlie Austin headed wide from a teasing free kick into the box.

But Derby would end the half strongly as Lawrence saw a snapshot go wide, whilst Craig Forsyth’s delivery on the left-hand side almost forced a goalscoring opportunity but it was just behind the onrushing forwards as the Rams led at the break.

But, that lead would only last five minutes into the second half as Queens Park Rangers managed to find the equaliser.

Stefan Johansen picked out Austin on the left with space to run into. He crossed to the back post where Willock stood and the forward side-footed his volley into the top corner to equalise.

Derby showed a good reaction, though. Byrne found Lawrence advancing in the penalty area but the skipper shot wide, whilst the Rams’ captain was doing working hard to break down a stubborn R’s defence.

The visitors did have spells of possession and almost took the lead on two occasions with less than 20 minutes of the game remaining.

They had a golden opportunity as Willock’s cross from the left found Ilias Chair racing into the middle, but he headed over the crossbar from inside the six yard box.

Three minutes later, Kelle Roos had to be alert as Yoann Barbet forced an instinctive stop from the Rams’ stopper.

Rooney made changes and brought on Colin Kazim-Richards and Festy Ebosele to bolster their attacking options, but the ball was just not sticking as QPR threatened in the closing stages.

They forced a number of corners and put the Rams’ defence under pressure and unfortunately that pressure paid off with a minute of normal time remaining.

As Chair headed against the post from a cross into the box, substitute Gray smashed an unstoppable past Roos to win the game for Queens Park Rangers.