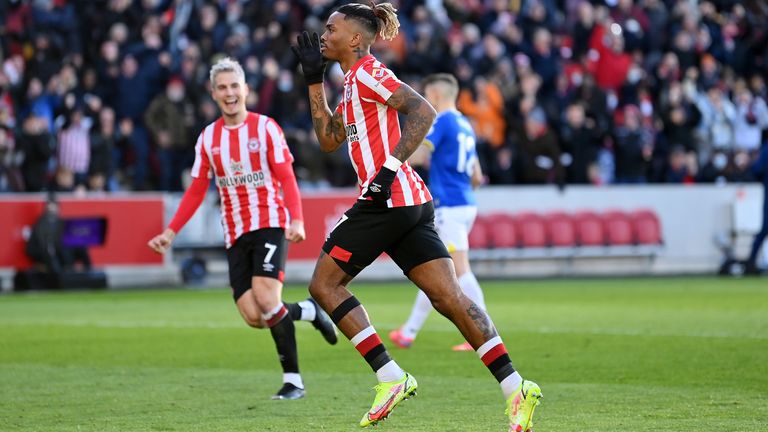 Toney struck from the penalty spot to decide a contest starved of quality after Andros Townsend was penalised for a high boot on Frank Onyeka upon VAR review. It was a sweet moment for Toney, who spoke in midweek of having not been given a fair chance under Rafael Benitez when the pair were at Newcastle in 2018.

Everton fought valiantly in search of an equaliser with Salomon Rondon missing two presentable opportunities either side of half-time, but their search for a first league win since September 25 continues, with second-placed Liverpool visiting Goodison Park on Wednesday.

The result moves Brentford above Everton into 12th place, with the Toffees slipping to 14th, six points above the relegation zone.

Image: Ivan Toney keeps his cool to slot from 12 yards

>Man of the match: Vitaly Janelt.

Brentford had lost three of their previous four league meetings with Everton, with this their first such game since a 6-1 away loss in the second tier in February 1954, but neither side arrived into this encounter with any confidence.

It showed during an opening 20 minutes low on quality and goalmouth action but that changed midway through the opening period when Onyeka was quickest to react to Jordan Pickford's punch from a corner to be caught by Townsend's high boot inside the box.

Image: Pontus Jansson had a chance in the build-up to the penalty award

Roy Keane told Sky Sports: "I think it was the right decision, dangerous play. If you look at Andros' face, he knows straight away they're going to check it. It's an attacking player's tackle, and if you raise your foot in the box - it's a penalty."

Referee Darren England initially waved play on but upon consultation from VAR Jon Moss, a spot-kick was awarded and Toney kept his composure to send Pickford the wrong way.

11 - Since the start of last season, Brentford's Ivan Toney has scored more penalties in league games than any other player in the top four tiers of English football (11/11 - 100%). Master.

This was the first meeting between Brentford and Everton in any competition since September 2010, in a League Cup match. Following a 1-1 draw at Griffin Park, the Bees progressed 4-3 on penalties that evening, but the visitors very nearly found an instant response when Rondon collected Lucas Digne's low cross to draw a smart save from Alvaro Fernandez.

Everton had won five of their last six Premier League games in London, as many as they had in their previous 32 visits to the capital in the competition, however they nearly fell further behind when Ethan Pinnock rose to meet Sergi Canos' corner but his header was straight at Pickford.

Everton's intricate build-up play lacked punch, and they were nearly punished on the break with five minutes of the opening period remaining when Toney's cross was inadvertently headed into the path of Bryan Mbeumo by Digne but Pickford read his intentions to make a simple save down to his right.

Digne's wild free-kick from a good position summed up Everton's half, sparking a mass exodus from the away end in search of warmth, but they had a penalty appeal turned down when Charlie Goode appeared to have a chunk of Rondon's shirt moments before the break.

Brentford made two changes for the visit of Everton in an attempt to end their five-match winless run in the Premier League. Charlie Goode and Frank Onyeka were recalled to the starting XI, with Mads Roerslev and Saman Ghoddos named as substitutes following starts in the 3-3 draw at Newcastle last weekend. Everton were boosted by the return of Abdoulaye Doucoure, who has missed the last month with a broken metatarsal, while Alex Iwobi and Salomon Rondon were also handed opportunities from the off.

Fabian Delph dropped to the bench along with Demarai Gray, although the attacker has at least recovered from the muscle injury which forced him off at Manchester City, while Richarlison served a one-match suspension for receiving his fifth yellow card of the season during Sunday's 3-0 defeat.

Everton finally exerted some pressure 10 minutes after the restart as Rondon's shot from the edge of the box was blocked by a throng of Brentford bodies in the area. Moments later, Abdoulaye Doucoure skied Seamus Coleman's cross but the ball fell kindly for Alex Iwobi to test Fernandez low to his right.

Midway through the second period, Pontus Jansson clashed with Digne as the Bees' captain expressed his anger when Everton refused to kick the ball out of play with Rico Henry down injured. It resulted in Rondon and Jansson both seeing yellow with Benitez soon turning to Demarai Gray as the Spaniard's desperation heightened.

Gray brought greater urgency as his devilish cross evaded Gordon at the far post moments after a snapshot was blocked by Pinnock, while Rondon's header from a Coleman cross was planted a yard wide. Everton continued to probe but Brentford stood firm to register a first clean sheet in eight Premier League games.

Speaking ahead of his reunion, Toney said it was a "blessing in disguise" that Benitez did not give him a chance to shine at Newcastle. The Spaniard was in charge of Newcastle in 2018 when the club sold Toney to Peterborough.

Since then, the striker has rebuilt his career and he scored a record number of goals in the Championship last season as the Bees won promotion.

Here, he haunted the beleaguered Everton boss with a trademark penalty - backing up Thomas Frank's claim he is the "best spot-kick taker in the world" - but it was his defensive work as much as anything else which made him the game's outstanding player.

Toney made four clearances, more than any other team-mate, while only Charlie Goode (9) and Christian Norgaard (13) regained possession on more occasions than him (8).

"But Benitez could hardly blame the match officials here as his side's second-half resurgence ultimately fell short. There was no lack of endeavour, but until the likes of Dominic Calvert-Lewin, Yerry Mina and Richarlison are back available, Everton look set to remain on this downward spiral."

Brentford go to Spurs on Thursday in the Premier League at 7.30pm, while Everton host Merseyside rivals Liverpool at 8.15pm on Wednesday. Free highlights from both games will be available on the Sky Sports website, App and YouTube channel.