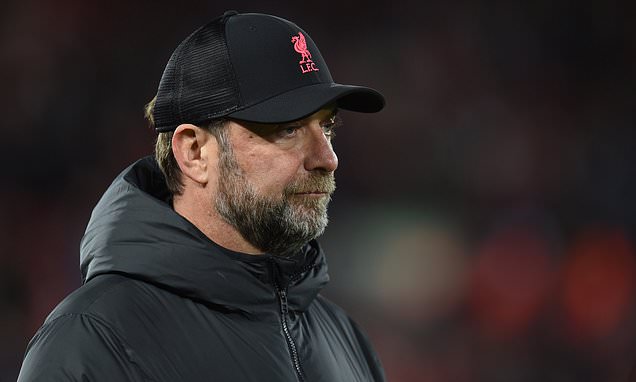 Liverpool manager Jurgen Klopp has admitted that the intensity of the Merseyside derby is 'too much' for him.

Klopp's side face Everton on Wednesday night in their first trip to Goodison Park since an especially ferocious encounter in October 2020.

The game ended 2-2 but there was much focus on Everton goalkeeper Jordan Pickford, who wasn't punished for a challenge on Virgil van Dijk which led to the Liverpool defender suffering an injury that kept him out for the remainder of last season.

In the same game Everton forward Richarlison was sent off for a rash tackle on Thiago, who missed the next ten league games.


Given what has happened in this fixture in the past, Klopp isn't particularly looking forward to facing Everton again.

'It's always a completely different game, so I really very often don't like the intensity of the game, it's too much for me,' Klopp told Sky Sports.

'I like physical football, I have no problem with that, we play that, other teams play that, but in that game very often people put too much in. I can't say it's my favourite game of the year to be honest, because of that.

'But we have the chance to watch Everton tomorrow, we will prepare for the game and will try to make a normal but good football game.'

Despite not being a major fan of the fixture, Klopp has an impressive record against Everton, having won seven, drawn five and lost just one of his 13 games versus the Toffees.

Liverpool will be determined to keep up the pressure on Chelsea at the top of the table and will go into the game full of confidence following three successive wins across all competitions.

The Reds will hope that they can avoid suffering further serious injuries against Everton, with van Dijk's absence last season, coupled with other defenders being out, made matters considerably difficult for Liverpool.

Before Everton can turn their focus to the Merseyside derby, they will firstly take on Brentford away on Sunday.

Former Liverpool boss Rafa Benitez is looking to arrest a slump which has seen them lose four of their last five Premier League games.