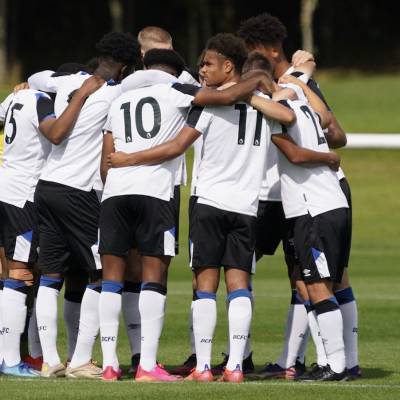 Derby County’s Under-18s welcome Chelsea to Moor Farm this Saturday for their third and final group game in the Premier League Under-18 Cup.

This fixture comes after the young Rams picked up their first home win of the season against Stoke City last weekend.

Derby is currently fourth in Group D of the Premier League Under-18 Cup on one point after drawing 1-1 with Reading and losing 2-1 to Blackburn in their previous outings.

The Blues sit top of the group on six points having beaten both Reading and Blackburn 3-2 on separate occasions.

Chelsea frontman Malik Mothersille, who enjoyed a loan spell at Derby last season, has hit the net three times in the competition so far with the Blues coming into this tie unbeaten in their last five league games.

The young Rams are unbeaten in their last four league games and will be coming into this tie full of confidence after their recent form.

Robinson’s recent switch to a back three has proved to be a revelation in both performances and results with the young Rams now showing their quality in a system that the whole squad look to have brought into.

Derby’s Sebagabo has been a standout performer all season and after he struck his second league goal of the season last time out, he will be hoping to continue his strong run of form against a tough Chelsea side.

The last time these two sides met was right back in 2013 when they battled it out for a place in the FA Youth Cup semi-finals.

Chelsea struck late on to win the game 2-1 in a tie which saw Derby perform extremely well.

Robinson and his team will certainly be looking to put on another positive display tomorrow with a win giving Derby a chance of qualifying to the quarterfinals as best runners up.