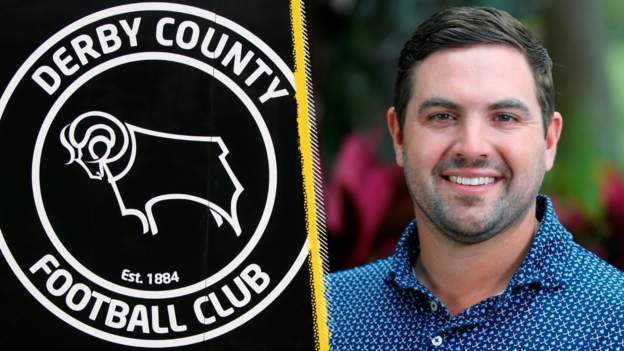 US businessman Chris Kirchner is pressing ahead with his attempt to buy Derby County despite the club's latest points deduction.

Wayne Rooney's side are now 18 points from safety in the Championship.

In a post on Twitter, Kirchner said the English Football League's latest deduction had not changed his intent.

The Texas-based 34-year-old is the co-founder of global logistics company Slync.io and confirmed his interest in taking over Derby in an open letter to supporters last month.

He said he was willing to "work through the complexities" with the administrators Quantuma, who have always said they are hopeful of finding a suitable buyer since the club was placed in their hands in September.

In his tweet, Kirchner said: "As I said in my letter this would be a long and complex process and it has proven to be exactly that and we knew there would be challenges with the club including additional points deduction which has not changed my intent.

"We are continuing with our work and diligence on the club. Yesterday my attorney was notified by the EFL that after our Owners and Directors Test submission of almost a dozen documents including sufficiency of funds and origin of funds they do not see any facts or circumstances that would result in any disqualifying condition.

"This is a great milestone in the process and I thank the EFL for their quick work on this matter."

'I have to plan for future now'

Following their latest points deduction, the 36-year-old told Rams TV: "Anything is possible and of course there is a chance (we can stay up) but also we have to be realistic, there is a big possibility that we'll go into League One.

"I have to plan now for the future of this club, whether that's Championship or League One, and in order to do that it's vital that we get the new owners in as soon as possible because that's the only way I can plan how we move forward.

"If that rumbles on and takes longer than we expect then it makes it almost impossible for me to put things in place."

Were it not for the points deductions, Derby would be 19th in the table, having won three and drawn nine of their 17 games so far, with Rooney having only been able to sign players who were free agents because of a transfer embargo.

A total of 44 points was just enough to keep the Rams up last season, but to reach that figure this term, they would need 47 from their remaining 29 games - with a maximum of 87 available.