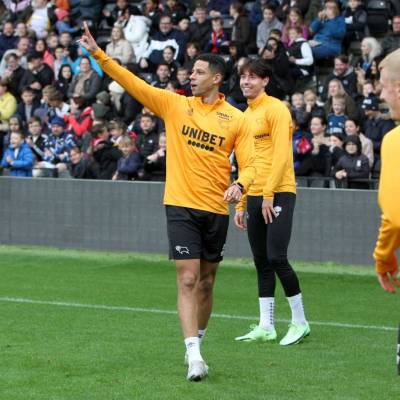 Derby County staged their first Open Training Session at Pride Park Stadium in over two years on Tuesday - and it proved to be a popular and fun-filled event for all those that were in attendance.

Supporters turned out in large numbers to watch Manager Wayne Rooney and his coaching staff put the squad through their paces ahead of Saturday’s home game against Blackburn Rovers in the Sky Bet Championship (3pm kick-off).

Almost 2,500 fans came to Pride Park Stadium to watch the Rams build up to the clash with Tony Mowbray’s side.

Attendees watched on from the East Stand as Rooney’s players went through several training exercises and a small-sided game, which was rounded off with a shooting exercise right in front of the supporters.

A live interview was conducted on the pitch with Assistant Manager Liam Rosenior over the Rams’ PA system, where he explained to supporters how each training session would work, while Rooney addressed the fans at the end of training.

There were prizes given out throughout the session too, including home match tickets and signed shirts.

Once the session was over, the players joined the supporters in the East Stand and offered the chance for them to obtain autographs and photographs.

The event was free to attend for all supporters and with the October half-term holidays in full swing a large number of school children turned out with their parents for a fun-filled morning of action.