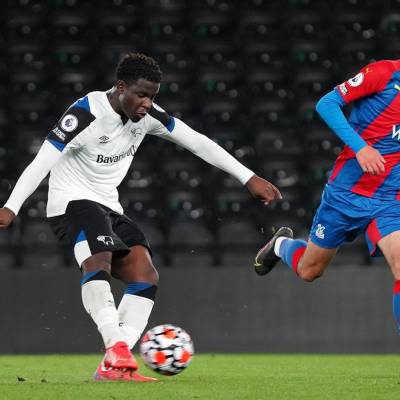 Derby County Under-23s suffered a 3-2 defeat at Pride Park Stadium as they were beaten by Crystal Palace in Premier League 2 - Division 1.

The Rams found themselves behind in the opening 15 minutes of the game as Omotayo Adaramola opened the scoring, whilst 10 minutes later, Scott Banks doubled Palace’s advantage.

But, Derby came out of the blocks flying in the second half as two quick goals brought the scores level.

Firstly, Luke Plange converted from close range and soon after Osazee Aghatise struck powerfully from 25 yards to equalise for the Rams.

However, after doing so well to get back into the game, Derby fell behind once again as Jesurun Rak-Sakyi netted from 10 yards to secure all three points for the visitors.

Derby started the game well and created some early chances. Aghatise had the first as a sweeping move found the midfielder in the penalty area but his curled effort was saved by Crystal Palace goalkeeper Joe Whitworth.

Moments later, central defender Jordan Brown took aim from distance and caught the ball well but Whitworth again made the save.

Luke Plange was next to test the palms of the Palace stopper as he created space on the edge of the box and shot but he was denied.

And for despite Derby’s good start, against the run of play, the visitors took the lead through full back Adaramola.

A reverse pass was played to Jack Wells-Morrison in the penalty box and he raced to the byline. He crossed but Derby could only half clear the ball into the path of the onrushing Adaramola and he curled into the corner to give Palace the lead.

The goal knocked the stuffing out of the Rams and they were soon two goals behind midway through the half. This time, Adaramola turned provider as he crossed for Banks who volleyed home from 12-yards past Harrison Foulkes.

Derby needed a lift but struggled to hold on to possession as Palace’s physicality caused the home side problems.

Plange did go close to halving the deficit with a little over five minutes remaining in the first half as he shot from inside the penalty area but an outstretched Crystal Palace leg denied the striker.

Pat Lyons switched formation to 3-4-3 at the start of the second half and introduced striker Bartosz Cybulski who made an immediate impact as Derby pulled a goal back soon after the interval.

Jack Stretton picked up a loose ball and played in Cybulski down the right. He crossed towards the back post where Plange stood and the forward rolled into the goal to reduce the arrears.

There was more energy about Derby in the second half as they held the momentum, however, Palace almost regained their two goal advantage minutes after as David Omilabu skied over from close range.

That missed effort did not deter the Rams who did eventually grab the equaliser through a stunning strike from Aghatise. The ball was rolled to the midfielder 25 yards from goal and he unleashed a fierce effort which was too strong for the goalkeeper and the Rams were level.

Derby continued to race forward as Stretton saw an effort blocked, whilst Brown shot off target just after the hour mark.

But, all of Derby’s hard work to get back into the game was undone with a little under 20 minutes of the game remaining as Palace retook the lead.

A ball across the box was played into the path of Rak-Sakyi who swept the ball past Foulkes to put the visitors back ahead for the second time in the game.

And they almost extended their lead with less than 10 minutes remaining. A cross into the box was headed off the line by Max Bardell, whilst from the follow up, Derby threw bodies on the line to keep the ball out. Foulkes was also called into action as he denied Wells-Morrison from inside the area.

Derby unfortunately could not manage to get back into the game and fell to defeat at Pride Park Stadium.