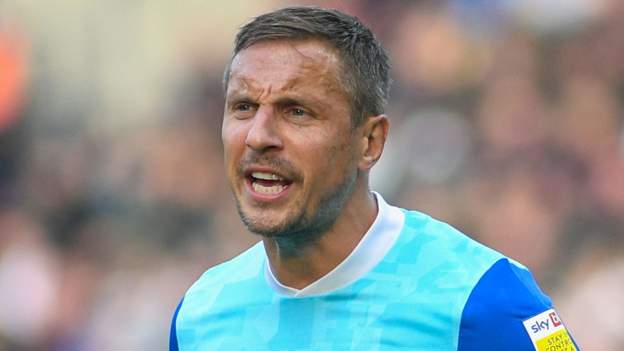 Ex-England defender Phil Jagielka has vowed to keep doing his bit to "keep the ship steady" as administrators try to find a buyer for Derby County.

The 39-year-old spent the pre-season with the Rams and agreed a short-term contract when they were cleared to sign free agents.

He has played eight of their 12 Championship games this season.

"It was a bit chaotic, something I'd never had to endure before," Jagielka told BBC Radio Derby.

"But it was quite fascinating to realise what goes on behind the scenes at a club that has potentially stretched itself too far.

"First and foremost you're thinking about what goes on on the pitch but then you've got to start looking at what goes on behind the closed doors, people losing their jobs.

"It's been really tough but as professionals, as footballers, as coaches, there's only one thing we can do to keep the ship steady and that's to try and go out there and play some good football and get some good results."

A 12-point deduction for going into administration left Derby bottom of the Championship, but the club are appealing against that sanction.

The Rams have kept clean sheets in half of their Championship games so far despite Jagielka playing the majority alongside 36-year-old Curtis Davies, with Richard Stearman, 34, and Craig Forysth, 32, also providing defensive options for boss Wayne Rooney.

"There's a lot of stats about how old the partnership [with Curt] is and if we bring Stears on it's over 100," said Jagielka, ahead of Tuesday's home game with Luton Town.

"It is what it is. I'm sure we've surprised a lot of people with the amount of clean sheets and the defensive performances. It's up to us to keep doing our job, regardless of our age and hopefully keep that momentum going."

Jagielka, who was released by Sheffield United at the end of last season, admitted it was "strange" being managed by Rooney - a former team-mate - who is four years younger.

"The way the manager is and the way [coach] Liam [Rosenior] is with me, there is massive respect both ways and age doesn't come into the conversation.

"They seem quite thankful that I'm here helping them out and vice versa. I'm very thankful they are prepared to give me the opportunity to keep playing football."