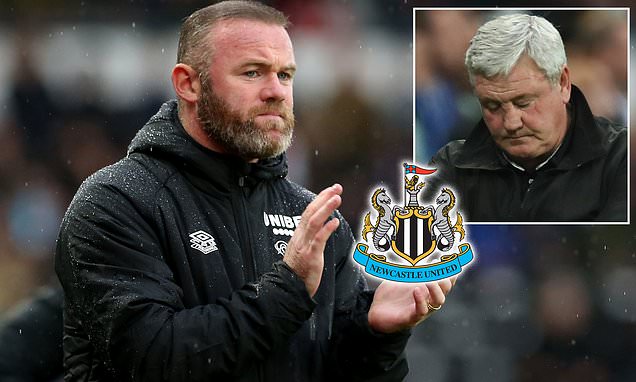 Wayne Rooney is interested in taking over at Newcastle United should the club's new Saudi owners sack Steve Bruce, according to reports.

Bruce is under increasing pressure following a defeat against Tottenham which ended sourly, with Sportsmail revealing a bust-up in the tunnel between Jamaal Lascelles and team-mate Isaac Hayden.

Sportsmail also understands that some players voiced their unhappiness with Bruce's tactics in the dressing-room after the game and a change has felt imminent for some time.

Rooney, who is cutting his teeth in management with Derby County in the Championship, would be interested in the role if it became available, according to The Chronicle.


Derby are mired in administration and sit bottom of the Championship after receiving a points deduction, leaving Rooney hamstrung in his hopes of taking the club up the table.

The report goes on to add that should Rooney be appointed he would be interested in bringing in former Newcastle goalkeeper Shay Given as part of his coaching staff.

Given spent some time working at Derby and any return to St James' Park would undoubtedly prove a hit with supporters.

Bruce has accepted the fans' frustrations with the club 19th in the Premier League and winless from their first eight matches.

But when asked if he would walk away from the toxicity he flatly refused to do so.

'I am not going to chuck it when it gets tough and we are in the bottom three. That's not me,' he said following the 3-2 loss to Tottenham.

'But at the end of the day we have not won enough matches this season, so whether you are myself or anybody else and if you are not winning, or not winning enough, then you have to take the consequences.'

Rooney could be one of a number of candidates considered should Amanda Staveley and Newcastle's new Saudi owners elect to dismiss Bruce.

Villarreal's Unai Emery, Rangers' Steven Gerrard and Paulo Fonseca are all believed to be in the mix.

Sportsmail has been told sacking Bruce remains the priority of Staveley and the board, but that the right processes must be followed and sign-off is needed by the majority shareholder, Saudi Arabia's Public Investment Fund.