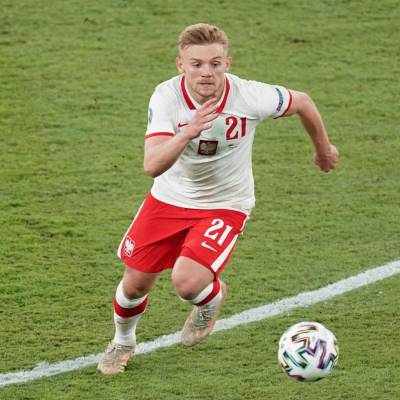 Winger Kamil Jozwiak started for Poland in their crucial 1-0 victory over Albania, whilst Academy graduate Jason Knight came on as a second half substitute in Republic of Ireland’s 4-0 friendly victory over Qatar.

Jozwiak, who earned his 19th international cap, played 71 minutes for Paulo Sousa’s side last night during their latest World Cup qualifying fixture as they moved up to second in Group I, three points behind England who sit in top spot.

PAOK striker Karol Swiderski scored the only goal of the game on 77 minutes as Poland leapfrogged Albania into second-placed ahead of their final two World Cup qualifying fixtures which take place in November.

Meanwhile, the Republic of Ireland faced World Cup hosts Qatar in a friendly fixture at the Aviva Stadium in Dublin and it proved to be a comfortable evening for Stephen Kenny’s side.

Leading 4-0 on the hour mark due to a hat-trick from West Bromwich Albion striker Callum Robinson and a header from Brighton & Hove Albion defender Shane Duffy, Kenny brought on Rams’ promising midfielder Knight in the 69th minute.

The 20-year-old, who made his return to the squad following an injury which ruled him out of the September international fixtures, played the final 20 minutes at the Aviva Stadium as Kenny earned his first victory in front of home supporters.

Knight, who made his international debut in a 1-0 defeat in Finland 12 months ago, earned his seventh cap for the Republic of Ireland last night.

Both players will now return to Derby ahead of Saturday’s Sky Bet Championship clash between Preston North End and Derby County at Deepdale (3pm kick off).