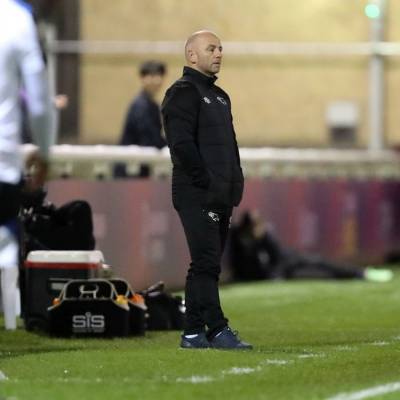 Pat Lyons believes Derby County’s Under-23s are ‘in good shape’ after a positive start to their Premier League Cup campaign.

Max Bardell saw red for the Rams soon afterwards for a second bookable offence and while Charlton pulled a goal back minutes later, Lyon’s side held on to pick up all three points.

It’s a return that Lyons is pleased with and he felt the Rams’ performance warranted all three points.

“We’re pleased to get that first win in the Premier League Cup and two games in, with four points on the board, we’re in good shape,” Lyons told RamsTV.

“The first half performance was good and we could have been out of sight really as we had numerous good opportunities to score.

“We were pleased to be ahead at half-time but we were also disappointed not to be further ahead The final decision-making was just lacking and the goalkeeper pulled off a few good saves.

“They were better than us early in the second half, but we managed to grow into things again and then no sooner had we got the second goal we were down to ten men with the sending off.

“It meant we had to dig in a bit and show some resilience, which I think we managed to do well.”

He added: “We needed to be brave on the ball and show some courage throughout, especially as they were a high-pressing side and a good outfit, and we’re happy to get three points.”

A difficult start to the 2021/22 season has left the Under-23s bottom of the Premier League 2 -Division 1 standings after six matches.

Lyons’ side, however, has included a large number of first-year professional stepping up from Under-18 level and on the whole performances have been encouraging.

Next up for the Rams is a trip south to face London on Saturday (1pm kick-off) and a win for Derby would see them leapfrog their opponents.

“We’ve done alright in terms of our performances and we’re building on each one,” he said.

“In our last league game at Manchester City we played really well, although we lost 1-0 in the end.

“We want to keep pushing and keep improving as we prepare for our trip to Chelsea on Saturday.”