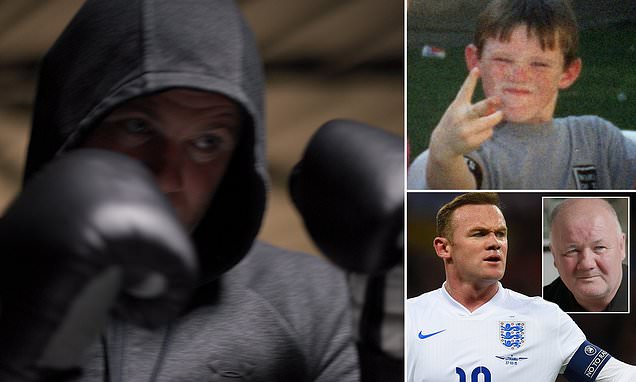 Wayne Rooney has revealed how he was 'slapped' by his father during a tough childhood which saw him 'brought up to fight for everything'.

The former England captain also admitted in a candid new documentary that he 'weren't the nicest kid' and 'had a lot of fights when I was younger', including with his own father.

The 'slaps' he suffered at home and his fighting on the streets of Croxteth in Liverpool forged Rooney's notoriously hard playing style, which repeatedly saw him sent off for impulsive violent acts on the pitch, including stamping on the genitals of Portugal's Ricardo Carvalho in the 2006 World Cup quarter-final.


Rooney's dad, Thomas, is asked in the film whether he had 'a switch' - suggesting a moment where he would lose control and become violent - to which he replies: 'Yeah, more than likely.'

Gary Neville, who played with Rooney for club and country, also admits that he saw Rooney throwing punches.

Rooney burst into the Premier League with Everton aged just 16 in 2002 and instantly wowed the country with his once-in-a-generation talent - and aggressive physicality - and consequently lived his entire adult life under intense public scrutiny. He went on to become a legend for Manchester United and England, captaining both as his fiery temperament became calmer in the latter part of his playing career.

Now the manager of crisis-stricken Derby County, Rooney, 35, has opened up about those early years growing up in the notorious area of Croxteth, where he developed his extraordinary skills and fighting spirit.

Rooney admits that his father, Thomas (right), used to 'give me a slap'; a young Rooney is pictured swearing to the camera (left) during his childhood in Croxteth, Liverpool

In a trailer for the film Rooney is seen boxing in his garage, reflecting his fighting spirit

In the new documentary, which will be available on Amazon Prime Video early next year, Rooney himself and some of the biggest names in the game, including Thierry Henry, David Beckham, Gary Neville and Rio Ferdinand, have given their verdict on the hard but genius player who graced the English top flight for 16 years.

'I was brought up to fight for my place to play, fight for everything. That will never leave me,' says Rooney.

'The area I grew up, Croxteth, if you are from there you don't feel it is a violent place.'

Croxteth has hit the national headlines for drugs, guns and killings many times, culminating in the appalling murder of 11-year-old Rhys Jones, who was shot dead in 2007 as he walked home from football training.

He went on to become a Manchester United legend, and their leading goalscorer ever

Amazon Prime Video is continuing an impressive strand of sporting documentaries with 'Rooney'.

When the film is streamed in early 2022, it will follow other sports blockbusters, including, All or Nothing: Tottenham Hotspur; All or Nothing: Manchester City Sir Alex Ferguson: Never Give In Andy Murray: Resurfacing and The Test.

The latest film, directed by Bafta award-winning director Matt Smith, examines Wayne Rooney's career and recounts stories from some of the most important moments of his life.

There is testimony from his wife, Coleen, and the documentary reflects on the player's tough upbringing in Liverpool and how it has shaped his career.

It deals with some of the highest and most challenging moments in the life of England's record goal scorer.

'Rooney is an honest and intimate documentary about one of the country's most famous sports stars who has faced untold pressure from a very young age,' said Martin Backlund, Head of Content, Prime Video UK & Nordics.

'Prime members will get to hear from Wayne himself on the events and moments that shaped who he was as a player and who he is as a man.'

Prime Video is available in the UK and Ireland. It costs £7.99 a month or £79 per year and offers a free 30-day trial. For information go toamazon.co.uk/prime

It was on these streets that Rooney learned to play and to stand up for himself. It was a combination that made for an irresistible force on the pitch, possessing finesse and ferocity in equal measure

'You looked at him, you knew he wanted to destroy everything that was in front of him,' says Thierry Henry, himself a legend after scoring 228 goals for Arsenal in all competitions.

The film has been directed by Matt Smith, who was also behind the Bafta award-winning BBC production, Rio Ferdinand: Being Mum and Dad, and the feature-length documentary, David Beckham: For the Love of The Game.

In this latest work, which is simply called Rooney, the former Manchester United star reveals it was outside and inside the home that he had to prove himself as a youngster.

Rooney confirmed that he and his father sometimes came to blows.

'I have had full-on arguments with me dad and he'd give me a slap,' reflects Rooney.

'I weren't the nicest kid. I had a lot of fights when I was younger.'

Rooney went on to make sure no one forgot, winning the Premier League, FA Cup, Champions League, League Cup, Europa League, and FIFA Club World Cup, as well as starring for United and England, becoming the record goalscorer for both with 253 for the Red Devils and a further 53 for his country.

The film also includes footage of a young Rooney rampaging down the touchline with the ball at his feet in a game of youth football on a park pitch, and a still image of him as a belligerent youngster, flicking a V-sign at the camera.

Many scenes are cut with clips of Rooney today, pummelling a punchbag in the garage at his home. Rooney trained as a boxer when he was younger and reveals quick hands in the film.

Famously he marked a goal against Tottenham in March 2015 with a boxing celebration and feigning a knockout after a video emerged of him sparring in the kitchen with his friend, Phil Bardsley, who was then at Stoke City. Rooney was actually the one on the receiving end of the KO blow, with Bardsley knocking his friend out cold with one punch.

For Rooney, who played for United from 2004 to 2017, nothing changed from how he played the game as a youngster, even when he was performing on the biggest stages of world football.

Rio Ferdinand (right), who shared 10 seasons with Rooney at Old Trafford, calls him a 'genius'

'He played like he was a street kid,' reflects ex-United defender Neville, who shared seven seasons with Rooney at Old Trafford.

'Of course, he threw the odd punch, but I never saw him throw a punch where no one deserved it.'

But that was only one part of Rooney's make-up and his team-mates at United and England were in awe of the Liverpudlian lad who hit the heights of the game.

'He is without doubt one of the best players this country has ever had,' added one of England's all-time greats and fellow United legend, David Beckham, who was capped by his country 115 times – only five fewer than Rooney himself.

Rooney famously celebrated a goal against Spurs in 2015 by throwing shadow punches and feigning a knockout. It followed video emerging of him being KO'd by friend Phil Bardsley

Rooney scored some incredible goals in his glittering career, including this overhead kick which was a late winner against United's fierce rivals Manchester City in February 2011

Rooney's wife Coleen also features in the documentary and reflects that her husband made mistakes -  including his infamous infidelity, which she 'forgives' him for but brands 'unacceptable' - but insists he was growing up in the public eye.

The couple, who have had four sons - Kai, 11, Klay, eight, Kit, five, and Cass, three -got together when they were 16, but they had known each other since they were 12 when Rooney played football against her brothers in the garages behind her house. They married in Italy after six years of dating, in 2008.

At the beginning of their relationship Rooney strayed and was caught out visiting prostitutes.

In 2010 Jennifer Thompson and Helen Wood claimed they had both slept with Rooney, when Coleen was pregnant with their first child.

'I forgive him, but it wasn't acceptable,' Coleen says of Rooney's infidelity.

Rooney himself admits: 'People still look at me in a different way. For me it's important that people remember me for who I am rather than what I've done.'

Earlier this year he was filmed asleep in a hotel room with three women all aged 21. He denies any sexual relationship with the women and insists he is the victim of a blackmail plot.

Rooney poses alongside his wife Coleen and their four sons - Cass, Kai, Klay and Kit - after he was presented with a trophy to commemorate his 120 caps for England in 2018

Rooney has won a lot of plaudits since he took over as manager at ailing Derby County. The Rams are bottom of the Championship with two points after suffering a 12-point deduction – now under appeal - with the club in administration.

Rooney is showing a different side to his character to that seen by most fans during his playing days. He is coaxing performances out of the Derby players in the most difficult circumstances and the Rams appear determined to make a bid for second-tier survival.

'For me it is important that people remember me for who I am, not what I have done,' says Rooney, an Everton fan.

And he concludes: 'Football will be a part of my life until the day I die, whether I like it or not.'