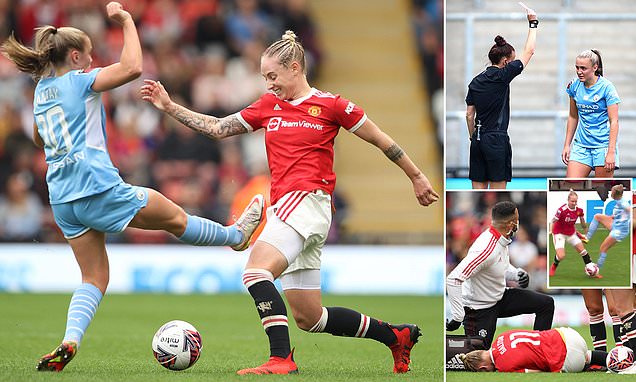 Manchester City went down to 10 in a thrilling Women's Super League Manchester derby after a reckless challenge from Georgia Stanway.

Stanway was given a straight red for a thigh-high, studs-up challenge on Leah Galton 10 minutes before the break.

The England international completely mistimed the challenge and went in studs up, hitting Galton just below the quad.

The nasty tackle was a clear red which even Stanway herself couldn't dispute and the referee had no option to send the 22-year-old off.


Galton appeared to be suffering some pain following the foul and received medical attention but recovered to remain on the pitch.

Yet, despite going a player down, City managed to snatch the lead just before half-time.

Three minutes after Stanway left the pitch, Bunny Shaw, who was brought on to replace Ellen White, scored a superb goal after Demi Stokes curled a beautiful cross into the middle. Shaw broke away from Aoife Mannion to plant an accomplished header into the bottom corner.

United finally benefitted from their on-pitch advantage after a series of chances in the second-half when substitute Lucy Staniforth found the net in the 72nd minute.

After coming on just past the hour mark, the midfielder levelled for the hosts with a clever back heel from a corner.

A mere three minutes later, the Reds had the wind in their sails as Alessia Russo managed to get a shot away that squeezed into the corner past Karima Taieb to put United in front.

But City star Ellen White came to the Blues' rescue to almost immediately equalise and secure a point.

Lauren Hemp hit the bar from distance, which may have gone in itself, but substitute White was waiting, ready to hammer home the loose ball to make sure.

City have suffered an embarrassing and limp start to the season with just one win in the WSL so far this season.

Originally considered a mere blip for an injury-hit side, Gareth Taylor's side headed into the derby looking for a vital win.

Meanwhile, Marc Skinner's Reds went into the sold-out crunch clash as favourites, probably for the first time in WSL history, on the back of three wins from four that sits them in fourth, just behind of last season's champions Chelsea on goal difference.