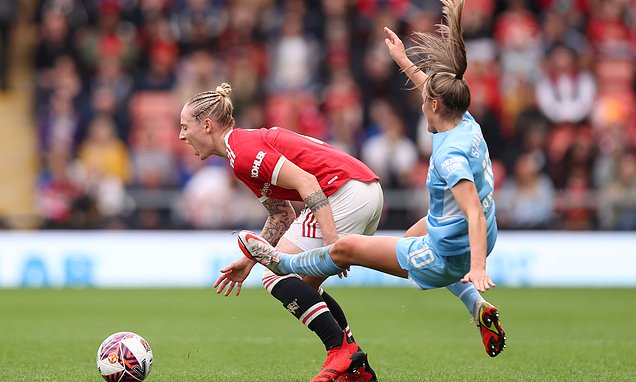 Four goals, a red card and a comeback - what more could you want from a Manchester derby?

For arguably the first time in the Women's Super League, United went into a game with City as the favourites but were held to a 2-2 draw after Ellen White salvaged a point for Gareth Taylor's threadbare team.

City were looking to end a run of three straight league defeats - their worst record since turning professional in 2014 - and were still without nine first-team players.

It didn't help that they had to play 55 minutes with 10 players after Georgia Stanway was sent off.


And when they conceded two goals in three minutes to go 2-1 down after Khadija Shaw's first-half header had put them ahead, it looked as if the pressure would be piling on Taylor.

But the City boss said earlier in the week that this is when you see what people are made of - and his team showed him they have more than enough fight to turn their season around.

They may have lost more ground on title favourites Arsenal and Chelsea, but defeat here would have put a real dent in their Champions League hopes and given United the advantage in what could be a battle between the two rivals for third spot.

It was City who looked more likely to break the deadlock and the first real chance of the game fell to Janine Beckie in the 13th minute.

Hemp's fizzing cross from the left wing found the winger in the box but her goal-bound effort was brilliantly kept out by Mary Earps.

Hemp then came close to finding the opener three minutes later when her header looked to be making its way to the top right corner but Maria Thorisdottir was there to head it away.

It took United until the 32nd minute to register a shot on target and Kirsty Hanson's long-range effort was easily held by City goalkeeper Karima Taieb.

City were reduced to 10 in the 35th minute when Stanway was shown red for a dangerous tackle on Leah Galton.

The ball bounced up in front of the United forward and Stanway came flying in with raised studs, making contact with the top of Galton's thigh and leaving referee Rebecca Welch no option but to send the England international off.

But if anything, that seemed to give City more urgency than United and three minutes later the visitors were ahead.

Demi Stokes' perfect cross found an unmarked Shaw and she guided her header past Earps at the near post.

It was nearly 2-0 just before half-time when Hemp got away from Ona Batlle and fired in a cross which just evaded Filippa Angeldahl, who was sliding in at the back post.

Hemp was causing problems again at the start of the second half. The winger powered down the left and fired a shot down the throat of Earps, but the United 'keeper was able to push her effort over the bar. At the other end, Ella Toone saw a long-range shot pushed away by Taieb.

United equalised from a corner in their 2-2 draw with City here last season and the visitors were undone by a set piece again as United found a leveller. Hannah Blundell played it short to Toone and her cross was cleverly flicked in by substitute Lucy Staniforth.

That shifted the momentum and a quick counter-attack saw United take the lead three minutes later.

Russo was picked out on the edge of the box by Blundell and she twisted away from Alex Greenwood and Jill Scott to squeeze a finish into the bottom right corner.

City could have let their heads drop but they were straight up the other end looking for an equaliser and they needed only four minutes to find one.

Jess Park's rocket shot rattled the crossbar before bouncing off Earps and falling kindly for Ellen White to tap-in the rebound.

For United, this will perhaps feel like an opportunity missed. But for City, there may yet be light at the end of the tunnel.