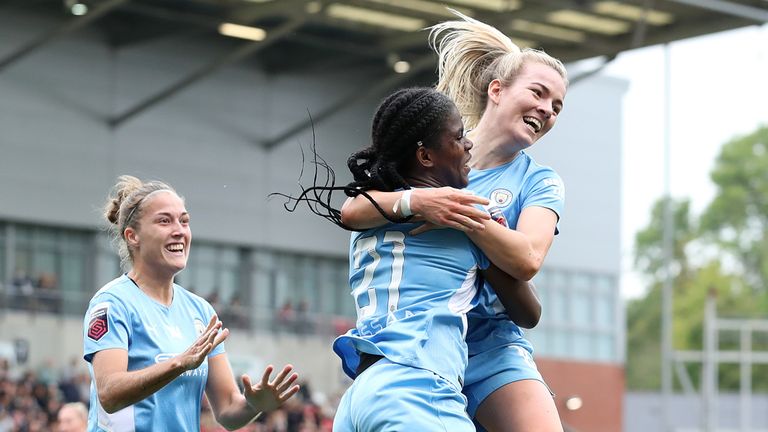 A pulsating finish in the Manchester derby saw Manchester United and Manchester City share the points in a 2-2 draw, ending City's run of defeats in the Women's Super League.

Gareth Taylor's side were looking to end a run of three straight losses, but were once again guilty of misses and some big early chances. Things deteriorated further when Georgia Stanway was shown a straight red card for a reckless challenge on Leah Galton (35).

But three minutes later, Man City went ahead as Khadija Shaw (38) nodded home from a fine Demi Stokes cross, with United having only one shot in the entire first half.

It began to look like the luck would not fall United's way, but they took a quick lead midway through the second half. Lucy Staniforth (72) flicked home after a quick corner, before Alessia Russo fired past Karima Taieb (75) to see the hosts ahead.

But it did not last long as Ellen White turned home in the 79th minute after another inspired Mary Earps save, seeing the Manchester pair play out another 2-2 draw at Leigh Sports Village, just as they did in the same fixture last season.

It sees City register their first point since the opening weekend of the season, although they remain in ninth on four points. United were unable to secure their first derby win the WSL, and go above Chelsea into third ahead of the remaining weekend games.

Man Utd are in Women's League Cup action on Thursday when they take on Durham. They return to Women's Super League action on Sunday November 7 when they travel to Tottenham; kick-off 2pm.

Man City have a series of cup fixtures coming up - they face Everton in their Women's League Cup match on Wednesday, before taking on Chelsea in the FA Cup semi-finals on Sunday October 31. They return to WSL action on Sunday November 7 when they face Leicester; kick-off 2pm.