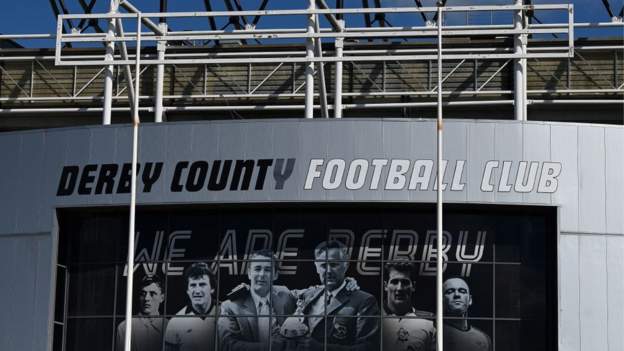 Confidence remains high at Derby County that a credible buyer will be found - even though it is accepted some tough negotiations lie ahead for the club's administrators.

Three weeks after owner Mel Morris admitted defeat in his battle to navigate Derby through their perilous financial situation, BBC Sport understands 21 'teaser' documents have been issued to interested parties, offering a brief sketch of the Championship outfit's situation.

In addition, four non-disclosure agreements have been signed, with a further three awaiting a signature, which shows serious intent, even if there is no guarantee a bid will eventually be received.

Other expressions of interest have been received which it is anticipated will be followed up more formally.

The administrators feel that their initial belief, that by the end of the year three preferred bidders will have been identified and Derby will be on the way to getting new owners, is on track.

Although the complete picture is not yet known due to the legal threats that have been made by Middlesbrough and Wycombe - both of whom have serious misgivings about the way Derby's affairs have been run - BBC Sport has been told Derby's overall liabilities are in excess of £150m.

While that sum seems enormous, much of that is owed to Morris, who is aware he will need to accept eye-watering losses to keep Derby afloat, which he has pledged to do.

It is also accepted that when it is eventually sold, the club, stadium and training ground, on which Derby has a 99-year lease, have to be part of the package.

Pride Park - which Morris still controls - will be sold for far less than the £80m valuation that was questioned by the Football League last year.

US investment firm MSD Holdings confirmed this week it had loaned Derby £15m. It is understood the overall figure is around £20m and that Pride Park is lodged as collateral.

It means that money borrowed by the administrators to ensure players are paid for the remainder of the year will be lodged against other assets belonging to the club, which includes Wayne Rooney's squad.

Although Derby do have the funds to pay October's wages, a loan is expected to be agreed by the end of the month, which will provide greater certainty as the administrators go about their work.

It is understood chief executive Stephen Pearce is still working with the club, putting in place the data rooms prospective buyers will be allowed access to, which will contain more detailed information about the club's business.

Any buyer would have to lodge a £5m payment to get initial access to the information, with a further £20m needed to move to the next stage, which is likely only to be available to the preferred bidders.

It is understood the administrators have already decided not to offer periods of exclusivity given the problems Wigan encountered last year, when the preferred bidder was unable to meet the Football League's owners' and directors' requirements but the administrators were unable to open the process up again until all avenues had been exhausted.

The club's administrators have eight weeks to publish a list of unsecured creditors, by which time the position around factors affecting the club should have become clearer.

This includes a further nine-point deduction - on top of the 12 points deducted for entering administration - that has been discussed with the Football League as punishment for financial breaches in the Morris era.