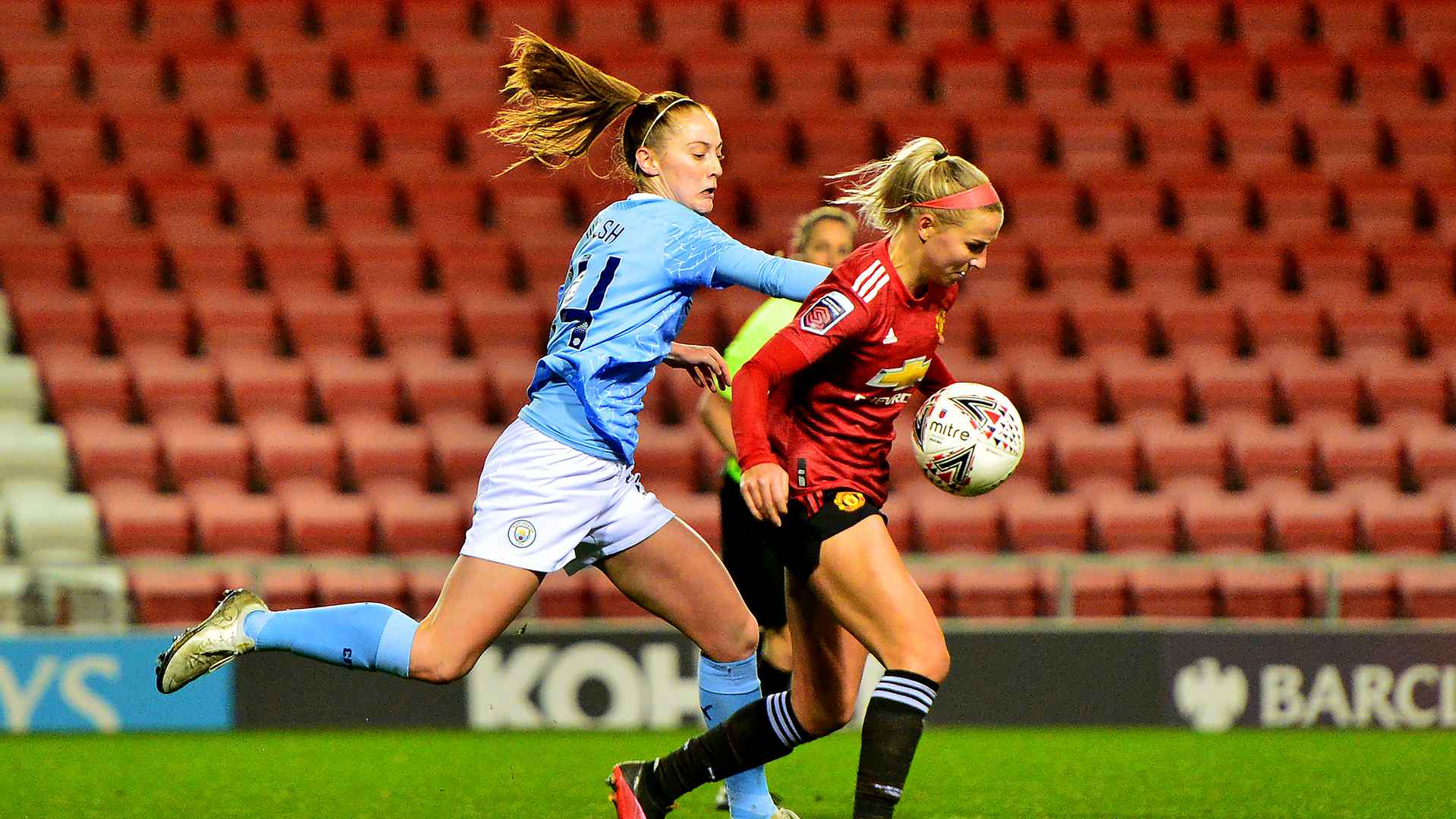 Whatever the competition and no matter what’s at stake, few things in football matter as much as victory on derby day – and Saturday's fixture has already seen plenty of drama across its six cross-city showdowns...

While the Manchester derby dates all the way back to 1891 in the men’s game, it’s been just over two years since the Reds and Blues first locked horns in competitive women’s football – but incredibly Saturday will be the seventh time the teams have met, with the local fixture already featuring stunning goals, officiating controversy and penalty shoot-out drama.

Former City manager Nick Cushing summed it up best after he’d watched his side beat United 3-2 in a tense FA Cup encounter back in January 2020. “No structure... end-to-end... teams going for it,” he smiled. “Maybe that’s [just] what derbies are like; maybe there’s so much emotion and passion in a Manchester derby that it’s always going to be like that.” Connections between these two teams are many, whether it’s players crossing the divide or simply friendships extending across the city, but on the pitch a strong rivalry has been formed, its intensity growing with each meeting.

This article is taken from the matchday programme for Manchester United v Manchester City. Fans can buy the programme - in which you can read Marc Skinner's column, an interview with high-flying Ella Toone and much more - at Leigh Sports Village ahead of Saturday's 13:30 BST kick-off.

For the very first encounter, we go back to September 2019, and a day that 31,213 fans – a then WSL record – were packed into the Etihad Stadium, with a huge away contingent of noisy Reds in full voice behind the goal. United travelled to east Manchester off the back of promotion from the Championship. Having only lost once in 20 matches in the league in 2018/19, conceding a mere seven goals and scoring only a couple fewer than a century, they arrived in M11 with nothing to fear from the Blues, while acknowledging it was going to be a big step up from all our previous league fixtures.

After all, Cushing’s City had won both domestic cups in 2018/19, while finishing second in the WSL. The 2019 Women’s World Cup, which saw England finished fourth – the Lionesses’s semi-final loss to USA being watched by a peak TV audience of 11.7m viewers on the BBC – only heightened interest in the WSL’s early-autumn kick-off, with this curtain-raiser taking place on 7 September, a day before 24,564 fans watched Emma Hayes’s Chelsea take on Spurs at Stamford Bridge.

Expectations were high at the Etihad, and it was a game played with intensity. Caroline Weir scored the only goal of the game on 48 minutes, the City midfielder striking across the ball with venom from 25 yards out and watching it power into the top-right corner of the net. Mary Earps, making her United debut, had no chance in goal, but she and her United team-mates proved their quality in front of the bumper crowd, particularly in the first half. Another United debutant, Jackie Groenen, hit the post late on but it wasn’t to be for Casey Stoney’s side, who left the Etihad with no points but increased belief for the rest of the WSL season.

Just six weeks after that first meeting came a second – this time at Leigh, where the vast majority of the 4,042 fans went home happy following a first derby win for the Reds, in the Continental League Cup.

“You belong at this level, you’ve got to start believing it,” was Stoney’s pre-match message to her players. After Katie Zelem and Jess Sigsworth had scored in a 2-0 win, on a day when Keira Walsh was red-carded for City, Stoney asked her players: “Do you believe it now?”

Two hard-fought derby matches in successive months had whet the appetite for neutrals as much as fans of either side, and so when the FA Cup draw brought the teams together once again that season, excitement abounded for another tasty 90 minutes at Leigh. One of only two all-WSL ties of the fourth round, it was gripping viewing, leading to City boss Cushing’s admission that such derbies have “no structure”. A double from Ellen White – one in each half – had given the visitors a comfortable lead, but the arrival of Lauren James off the bench on the hour mark turned the game in our favour. The teenager first won a corner for the Reds, from which the ball found its way into the back of the net, only for the referee to deem the goalkeeper had been fouled. A few minutes later, James emphatically dragged United back into contention with a left-footed strike into the bottom-right corner.

It should have been level soon after when Abbie McManus bundled the ball over the line from a free-kick. Goalkeeper Ellie Roebuck dived to claw the ball back and United were left ruing the absence of goal-line technology – a point Stoney forcefully made post-match. To make matters worse, Jill Scott’s outside-of-the-box effort beat Earps to restore City’s two-goal lead, making Lauren Hemp’s late own goal futile for United in a 3-2 defeat.

'THIS PERFORMANCE WAS FOR OUR FANS'

Unfortunately, the 2019/20 season was curtailed before the second WSL derby could be played, making the first meeting of 2020/21 even more significant. As with all senior football last season, the absence of fans dampened the occasion but the quality and excitement on the pitch proved a perfect opener to Women’s Football Weekend in November 2020, with Leigh once again the venue. Much like the FA Cup game 10 months earlier, City went two goals ahead, this time through Chloe Kelly and Laura Coombs.

“I take full responsibility for the first half,” Stoney said afterwards. “I think I got the press wrong.” Our former head coach certainly showed the nous to change things at half-time, though – the second half was so distinctly different to the first that the game-of-two-halves cliché has rarely been truer. United’s Tobin Heath led the charge with a furiously struck drive from just inside the box, flying into the top-left corner. With 16 minutes remaining, substitute Kirsty Hanson scored the equaliser and were it not for a clearance off the line to deny a Lucy Staniforth header, United would have completed a stunning comeback in the last minute.

“The second half performance was for our fans; we know how much it means to them,” said Stoney of those watching on TV, in a season when all but one of our 22 WSL fixtures were played behind closed doors. And with five wins and two draws from seven games, we were sitting pretty at the top of the league heading into December.

Just five days after that dramatic draw, the two sides met in the Continental League Cup group stage, once again in Leigh for the fourth successive derby. United needed a win to progress, City only a point. A goalless draw followed without any of the drama that had come the previous weekend. It meant City had enough to qualify as group winners, while we took one point too, but even claiming a bonus point through winning the ensuing shoot-out wouldn’t be enough to take us through. Nevertheless, local pride was still at stake, and Emily Ramsey – making a rare start in goal – enjoyed herself as she denied Coombs (below), before ex-Red Alex Greenwood hit the woodwork, as United won 4-3 from the spot.

Ramsey keeps out the penalty from Coombs during United's shoot-out victory over City in November 2020.

LEAPFROGGED IN THE LEAGUE

Into 2021, and derby meeting no.6 at a cold Academy Stadium in February. A painful loss at Reading the previous week had seen us lose ground at the top of the WSL, and another loss at LSV would see us slip down to third place after 15 WSL matchdays. City’s Caroline Weir stole the show in the 84th minute with a delicately chipped goal from the edge of the box – one which City team-mate Lucy Bronze claimed was “Eric Cantona-esque”. It was a wonderful piece of skill to wrap up a 3-0 win for from the Blues, who leapfrogged United in the table. While a long injury list didn’t help the Reds’ chances of success that day, City were excellent, their confidence summed up by Weir’s stunning late goal.

And now for derby number seven, where a home win would lay down a real marker for the Reds’ WSL ambitions in 2021/22. In his pre-match press conference, head coach Skinner spoke about his side's desire to add to the fixture's history in a positive way this weekend, saying, “I want us to create memories regardless of the opponent, that’s important. Because we’re more visible, we want young girls to see players playing at the top of their game, being really exciting to watch, and something they envisage in their futures. But we’d love to create special derby moments and we’re going to try to do that against Manchester City.”

So, hold on tight, because as we’ve seen, anything could happen in the 90 minutes to come on Saturday.

You can be at the game, with tickets available to purchase here.