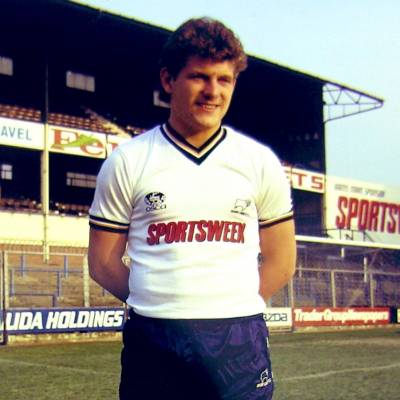 A memorial match is to take place on Sunday 10th October 2021 to celebrate the life of former Derby County player Mickey Lewis.

The former Rams’ midfielder sadly passed away on 6th March 2021 after being diagnosed with cancer.

And, this weekend, Oxford United’s Kassam Stadium will host a charity match in aid of Mickey’s family with all money raised going to his wife Suzanne and son Zach.

Born and bred in Birmingham, Lewis started his career at West Bromwich Albion and was capped by England at youth international level.

He made his debut for the Baggies at the age of just 16 and went on to play 33 times for his first club before Arthur Cox brought him to Derby for a fee of around £30,000 midway through the 1984/85 season.

He was regarded as an energetic, tenacious player and keen tackler in the middle of the park.

Lewis made 50 appearances for the Rams in the mid-1980s under Cox’s management he and scored one goal in Derby colours.

That single strike came in a 4-2 home victory over Wolverhampton Wanderers in August 1985 on Derby’s way to gaining promotion from Division Three.

He was limited to five appearances in the league that season, losing his place to Geraint Williams, and did not make a single first-team outing in the 1986/87 title-winning campaign in Division Two as the Rams registered back-to-back promotions to the top-flight.

Back in Division One, Lewis made a further 16 appearances for Derby as they retained their status back in the top tier and his final game for the Rams was against local rivals Nottingham Forest at the City Ground in March 1988.

Lewis’s departure from the Baseball Ground saw him head to Oxford United in part-exchange for Trevor Hebberd and he was named as their Player of the Year in the 1988/89 campaign.

Lewis made 351 appearances for Oxford and firmly established himself as a fans’ favourite at the Manor Ground.

He went on to enjoy a long association with Oxford and that continued into coaching after he retired in 1999. He held several positions on the coaching staff across many years, from the youth team to first team, and this also included two separate spells as caretaker manager.

Lewis also assisted former Derby striker Dave Penney at Doncaster Rovers in the 2005/06 season, either side of his coaching stints at Oxford, which brought their incredible run to the quarter finals of the League Cup with victories over Aston Villa and Manchester City before taking Arsenal to penalties.

He finally left Oxford for good in 2015 after a 28-year association with the club in total. He managed Hayes & Yeading United, after which he continued coaching the Oxford University side. He was also the Head Coach for the male programmes for the Oxford City Velocity education programme.

Tickets for the memorial match are still available to purchase and are priced at £10 for adults and £5 for Under-18s and Students. To buy tickets, please click here.

Should you not be able to attend but wish to make a donation, please click here.

To find out more about Mickey, his life and the game itself, please visit mickeylewis.co.uk.