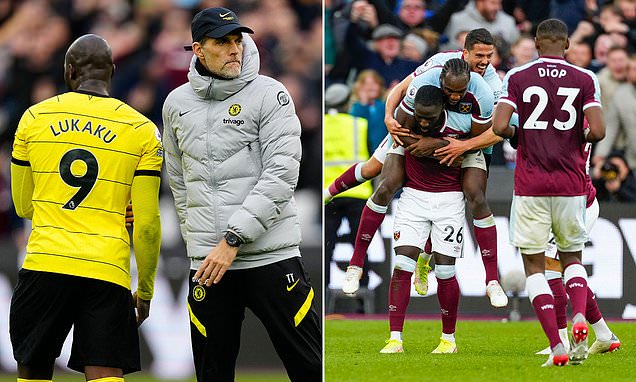 Thomas Tuchel did not show his face. There was just a black space where it should have appeared on the press conference Zoom screen and the voice of a man who knows, though he isn't admitting it, that Liverpool and Manchester City look immeasurably better teams than his own.

No, he didn't know when N'Golo Kante, Chelsea's fulcrum who they miss so much, would be back. No, he wouldn't entertain a question about whether Kante might appear again this year. 'It's not interesting what I think,' said Tuchel. 'He has a long way to go.'

There was a lot of negativity emanating from that black hole, with further impediments to Chelsea's progress including the hip pain Jorginho is feeling in every game, Mateo Kovacic's continued absence and — Tuchel admitted — Romelu Lukaku not being ready for the 45 minutes of football he was put through on Saturday.

The £97million forward was brought on, Tuchel explained, because Chelsea lacked height to defend set-pieces after Kai Havertz's injury. 'It's my fault because I don't think he is ready,' Tuchel said. 'This is on me and this is my responsibility.'


The big picture is about where Chelsea's goals are going to start coming from, considering none of their strikers are providing them and a title-winning side needs prolific forwards.

Havertz was a marginal presence. Timo Werner did not start. The pair of them and Lukaku have a collective Premier League goal tally of six. Jurgen Klopp's most prolific three — Mo Salah, Diogo Jota and Sadio Mane — have 28.

There was a lot of possession, precision and prettiness but few rapid passing combinations to leave David Moyes's West Ham gasping for air. Matches against Manchester United have been a barometer for the teams with title pretensions. Liverpool and City swept them away. Chelsea lightly dusted them.

Mason Mount was their silver lining. There was a moment in the second half when the 22-year-old seemed destined to collide with Tuchel near the touchline but he danced around him, briefly using him for balance as he span away and moved on. His volleyed goal — eyes fixed on the ball as he connected with Hakim Ziyech's diagonal pass — will live long in the memory. But he ran the team, too, and bore their burdens.

Just as Declan Rice did in West Ham's engine room in the first half. Though Jarrod Bowen took the plaudits, this was Rice back to his optimum level. Some of those who know West Ham best see the qualities of Steven Gerrard in him. The comparison was certainly justified here.

In a team lacking goal scorers, Mason Mount was superb in running the team's attack

West Ham, who have sent two Champions League winners packing in the space of a month, keep confounding expectations about how high they can fly.

It is a story about Moyes being given the chance to display the instinctive eye for a player which was there all along, throughout a very difficult four years in management, and to instil the work ethic and organisation which drove his Everton teams to great heights.

But it is also about two men in their 50s who watched from Row C of the main stand on Saturday, with notebooks, files and walkie-talkies to link to the bench. Stuart Pearce and Billy McKinlay are the kind of coaches who fell out of fashion in the search for the younger, seemingly more sophisticated practitioners of their craft.

McKinlay was out of work and wondering how he would ever make it back into the game eight years ago, when the managerial merry-go-round at Fulham saw him out on his ear.

From 2004, he developed some of Craven Cottage's best young talents and brought out the best we saw from Dimitar Berbatov on British soil. Moyes knew precisely what he could bring.

Pearce and McKinlay were the most delighted with West Ham's second goal, given the way they were pointing at their monitor during replays. The idea of Vladimir Coufal winning an aerial challenge, creating space and the second ball for Bowen to score, was clearly something they had plotted.

When the winner went in, the two were bouncing around and hugging each other.

Tuchel will begin the week with medical reports on Havertz, who was in 'huge pain' on Saturday, and Marcos Alonso, who has back trouble.