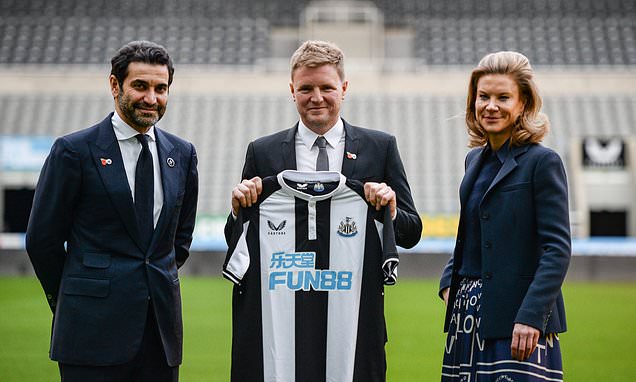 The Telegraph had reported on Saturday that the former Chelsea and Monaco technical director had said no to Newcastle as the club could not meet his ambitious plans.

Ghodoussi, who is married to Newcastle director Amanda Staveley, issued the denial in a post on Twitter on Sunday.

He wrote: 'Contrary to a newspaper report, Michael Emenalo was never offered the job of Sporting Director or Director of Football at Newcastle United. #NUFC #FactsMatter.'


According to the Telegraph report, Emenalo, 56, travelled to Saudi Arabia for talks and was understood to be the club's top choice for the role, with director Jamie Reuben and Newcastle's Saudi owners as well as coach Eddie Howe keen to appoint him.

But after thorough negotiations with director Amanda Staveley, in which he outlined his short- and long-term ideas to improve the club, Emenalo reportedly felt the club's current vision did not suit him.

Contrary to a newspaper report, Michael Emenalo was never offered the job of Sporting Director or Director of Football at Newcastle United. #NUFC #FactsMatter

Emenalo is a highly respected name despite a disappointing spell at Monaco, where he worked between 2017 and 2019, taking over shortly after the club had won the Ligue 1 title and reached the semi-finals of the Champions League with a team containing Kylian Mbappe, Bernardo Silva and Fabinho.

His time at the club coincided with a huge dip in results following the departure of their star players and they narrowly avoided relegation in May 2019.

But Emenalo enjoyed a decade of success at Chelsea, in which time they won three Premier Leagues, the FA and League Cups, plus the 2011/12 Champions League and 2012/13 Europa League.

He helped the club sign the likes of Romelu Lukaku, Kevin De Bruyne, Thibaut Courtois and Eden Hazard while revamping the club's academy, which has recently produced first team regulars such as Reece James and Mason Mount and generated big-money sales from Fikayo Tomori and Tammy Abraham.